I did a lot of moving in July, making tracks eastward till I hit Massachusetts. Eight stops, from Ohio to New York, where I spent most of the month, crossing the Mass state line on July 28th. Read on to see where I was and the adventures taken…

END_OF_DOCUMENT_TOKEN_TO_BE_REPLACED

In another lifetime, I fell in love with a boat. Not just any boat. This boat. The Hudson River Sloop Clearwater. And, as it turns out, more than 35 years later, I’m still in love with that boat. Just look at her, she’s beautiful, in a functional, working-class boat kind of way. 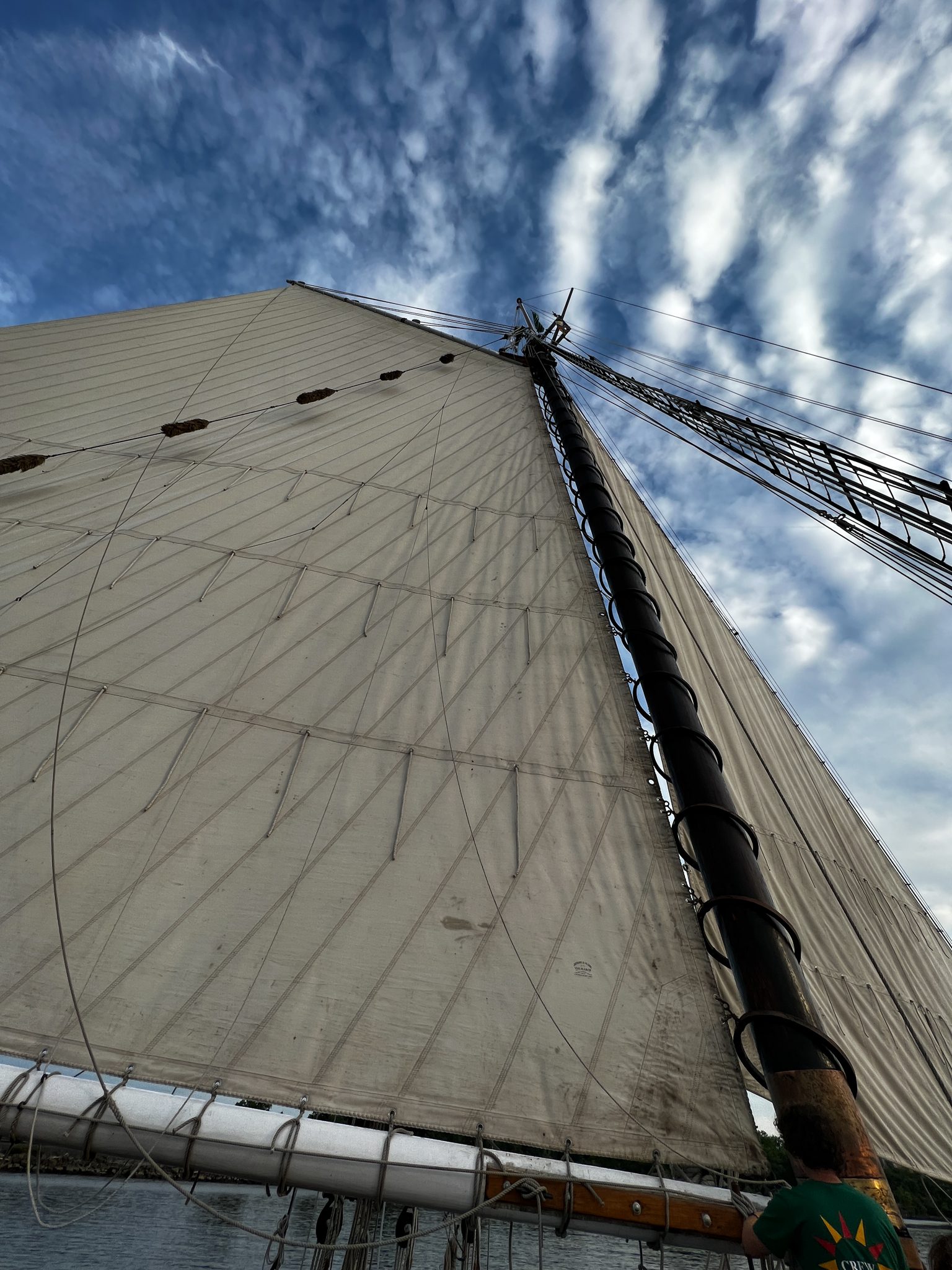 I had the opportunity to take a two-hour evening sail on the Clearwater last week and jumped on it. I hadn’t been aboard since I moved out of the Hudson Valley in 1987. So how did it feel to be back? In a word, magical.

END_OF_DOCUMENT_TOKEN_TO_BE_REPLACED

I lived in the Hudson Valley for several years in the early to mid 1980s and yet, I had never visited Manitoga, an artist’s retreat created out of the remnants of an abandoned rock quarry. Last month, it was time to rectify that situation and see what Manitoga was all about. In the end, it was worth the two hours drive (one way!) to see this place, even on a very hot and humid Saturday. 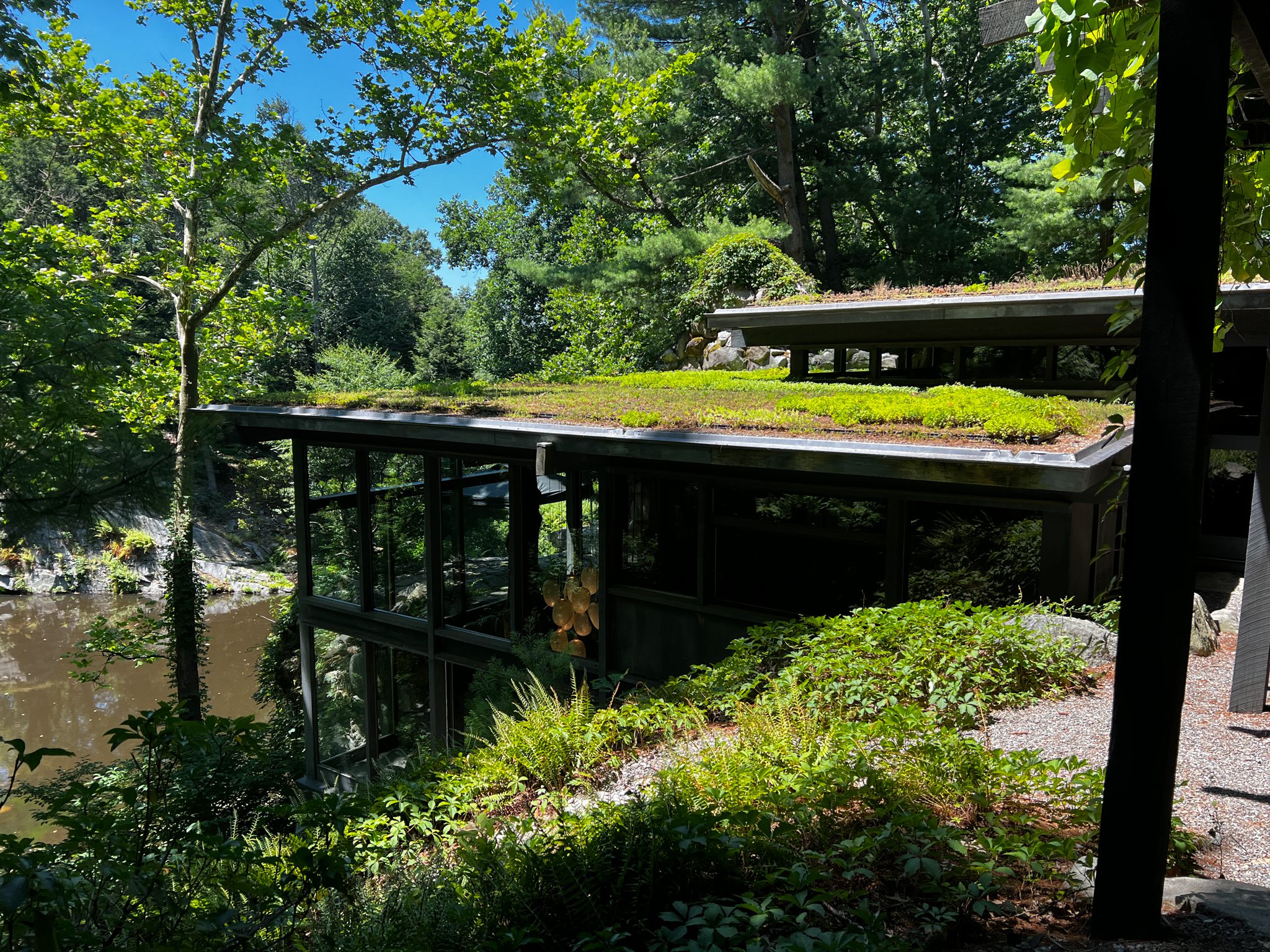 END_OF_DOCUMENT_TOKEN_TO_BE_REPLACED

While I was in the Finger Lakes region, I couldn’t resist the half-hour drive down to Corning to visit one of my favorite museums, the aptly named Corning Museum of Glass. Such gorgeous creations in there, and it is a treasure trove for photographers. 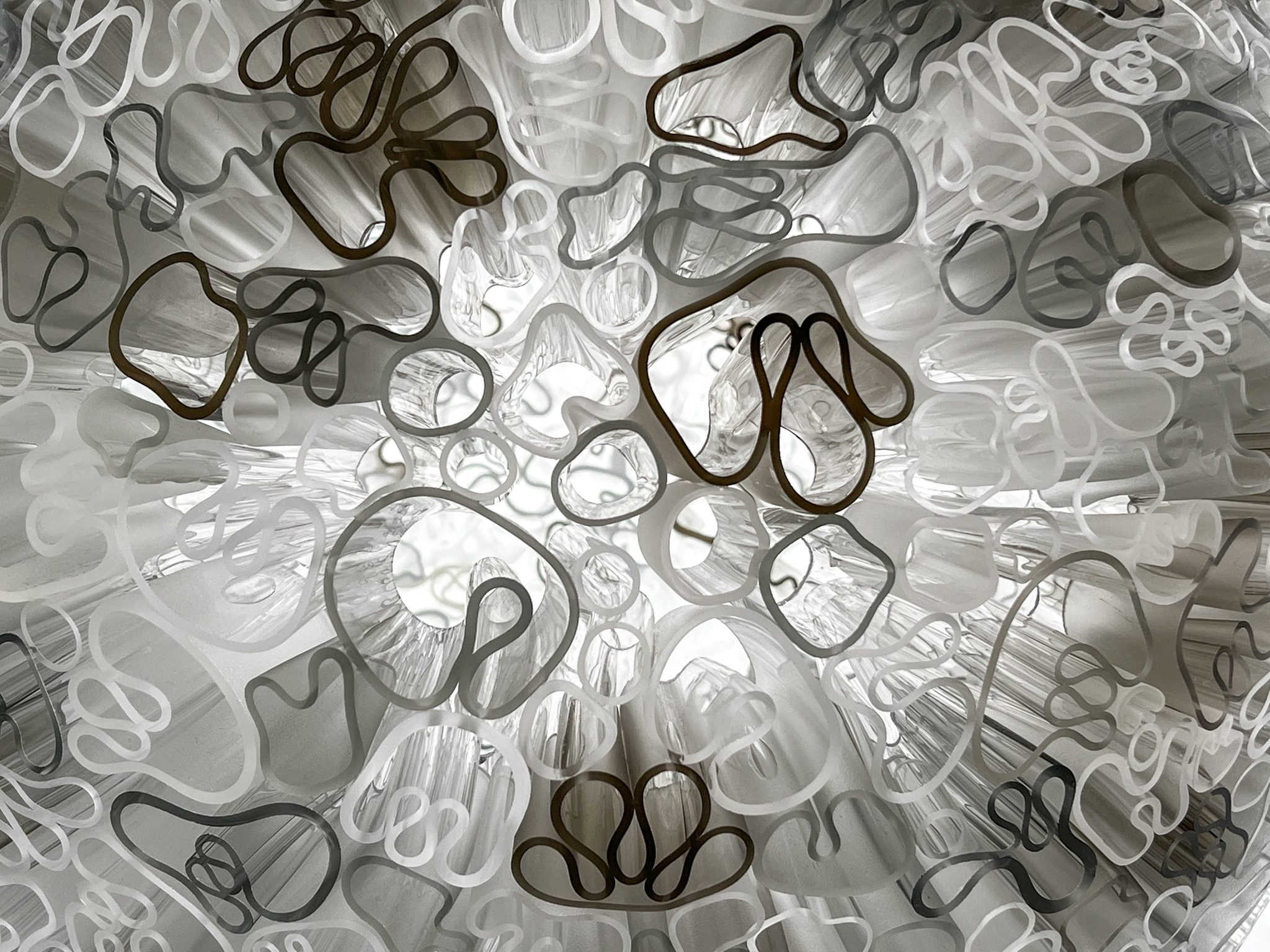 While I was in Corning, I also checked out the Rockwell Museum down the street, since there was a combined ticket for both. I’m always up for a new museum. Read on to see the treasures I found…

END_OF_DOCUMENT_TOKEN_TO_BE_REPLACED

Last time I passed through Watkins Glen, the parking lots were stuffed full of cars and I was towing a trailer, so I didn’t stop and check it out. This year, I planned way better: four nights at the state park campground, giving me plenty of time to wait out the rain and heat (yes, there were both!) and hike the famous Gorge. It was definitely worth the wait. 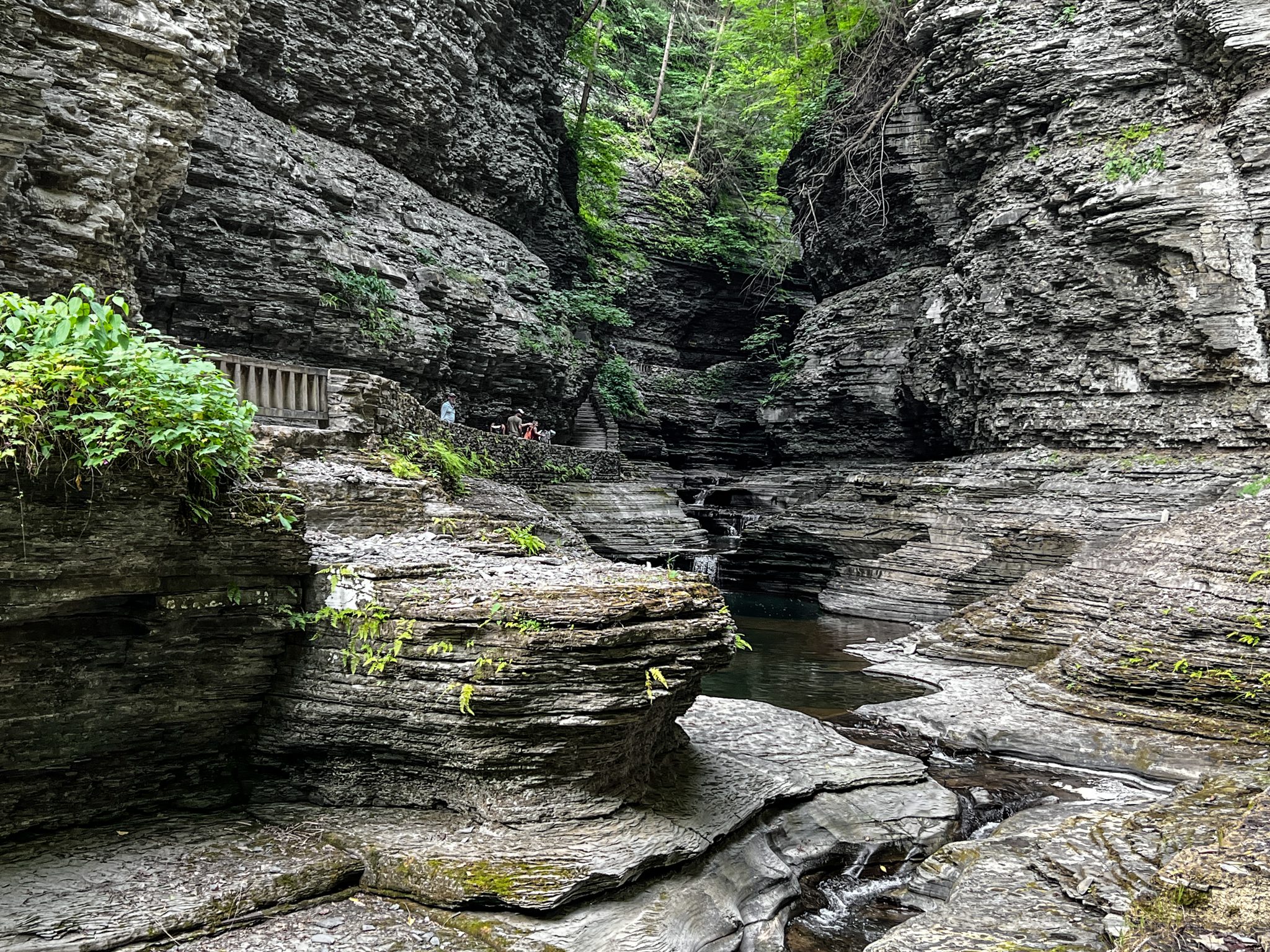 END_OF_DOCUMENT_TOKEN_TO_BE_REPLACED

One of the most interesting things about Letchworth State Park in western New York is the Autism Nature Trail (ANT), designed to give autistic kids time and space to experience nature in the ways most comfortable to them. I visited the trail one quiet Sunday morning and was pretty impressed by the design and implementation. 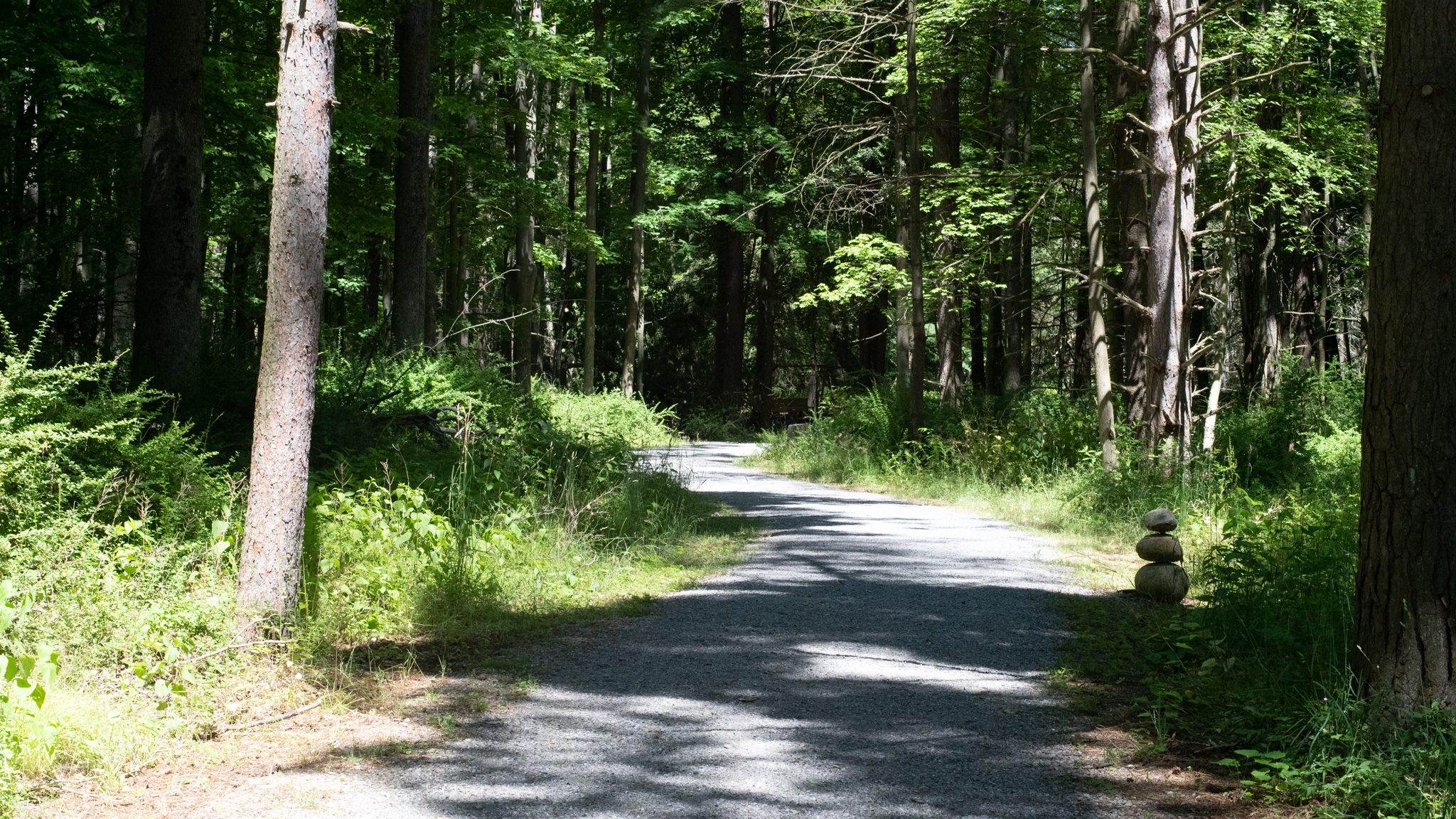 END_OF_DOCUMENT_TOKEN_TO_BE_REPLACED

It only took me six years but I finally camped by the shores of the all five Great Lakes: Ontario, Erie, Huron, Michigan, and Superior. Surprisingly, I camped in just two states to achieve that bucket list item: Michigan and New York. And, no, I really can’t pick a favorite Great Lake, that’s asking way too much of me, a person who has a deep devotion to any body of water bigger than a rain puddle.

END_OF_DOCUMENT_TOKEN_TO_BE_REPLACED

Last April, on the way from Seattle to Quebec to pick up my Alto, I stopped at Niagara Falls for a night, staying on the Canadian side and enjoying a hotel-room-view of the Horseshoe Falls. I found the whole “big loud water” thing amazing and decided that I’d be back someday. 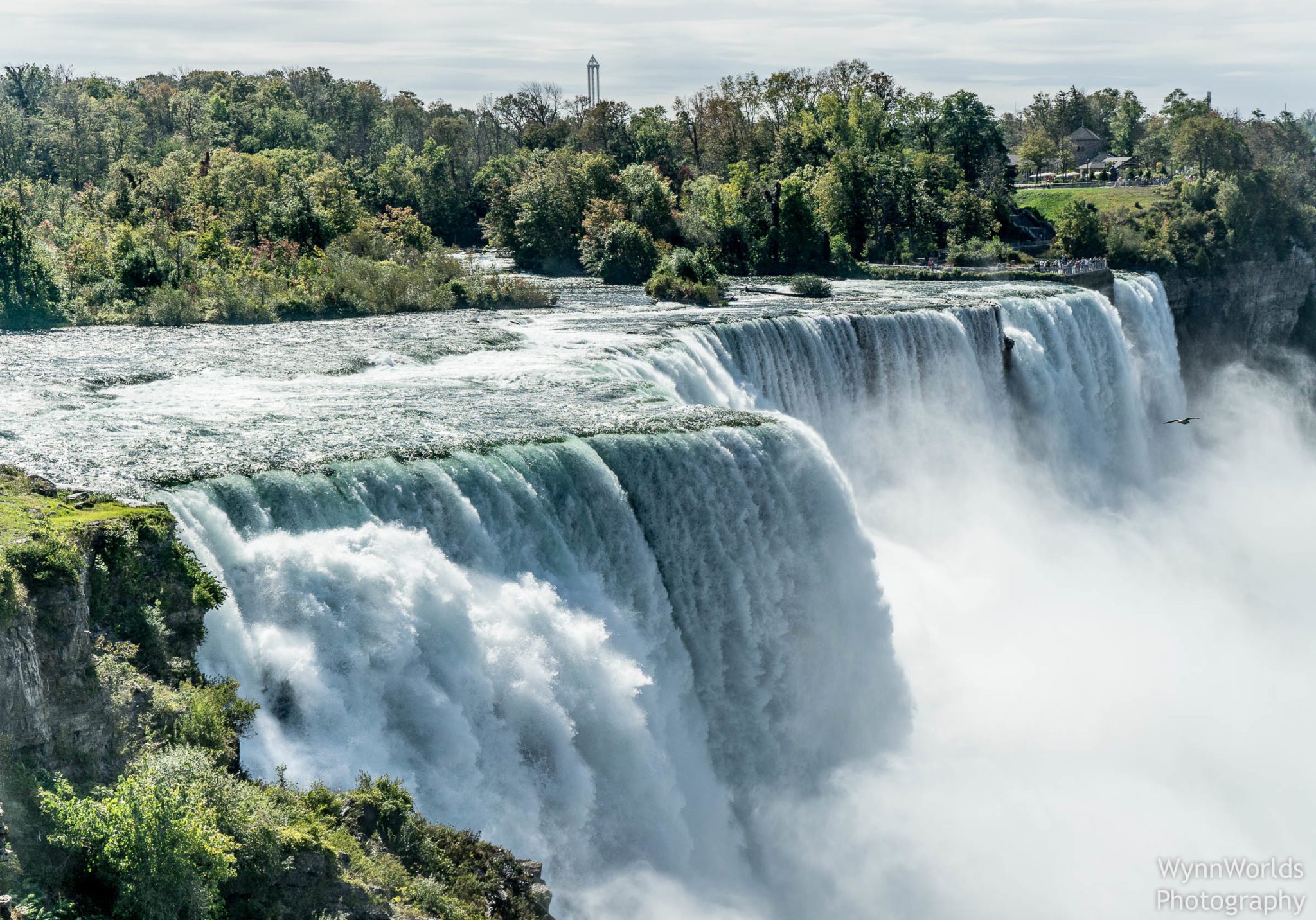 And here is American Falls on the left and Horseshoe Falls back to the right. Last year, standing on the other side right next to those falls, I thought the American Falls were kind of puny. I was wrong. They are just as impressive! 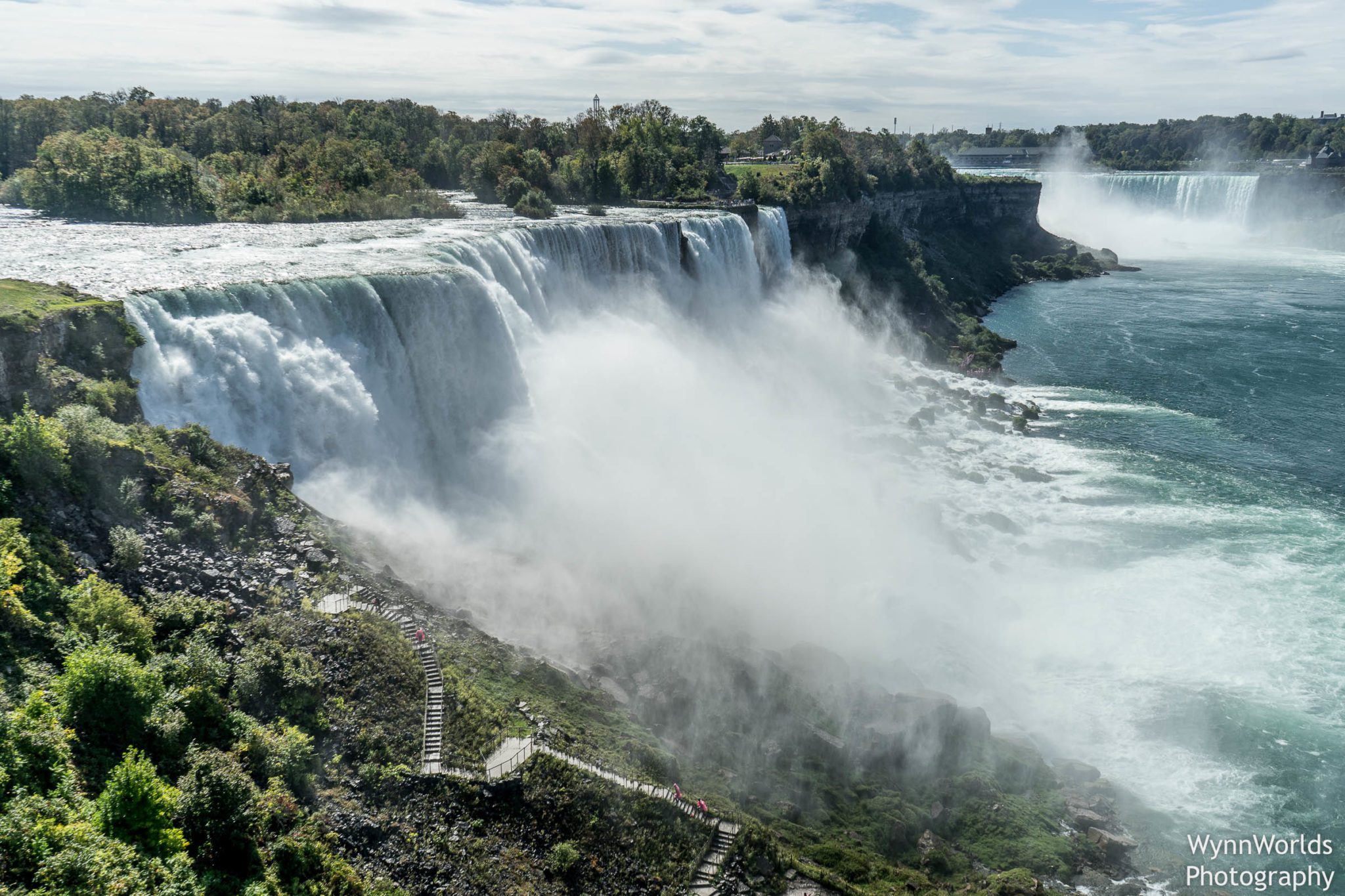 Yes, that’s a boat down there, with people on it. Maid of the Mist. It was so windy that the last place I wanted to be was down there! 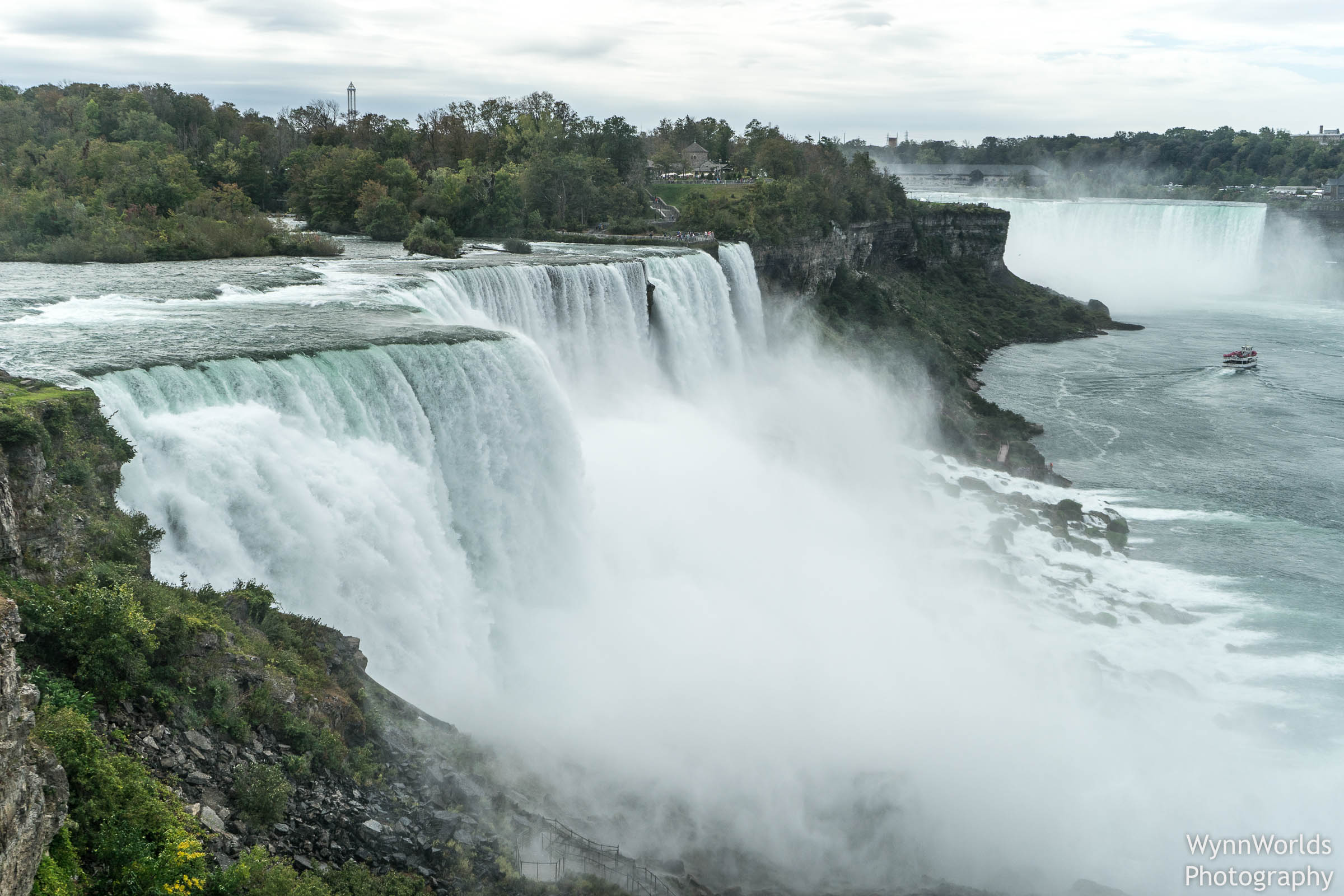 A close-up of the American Falls, because, really, I just can’t get enough of this water. 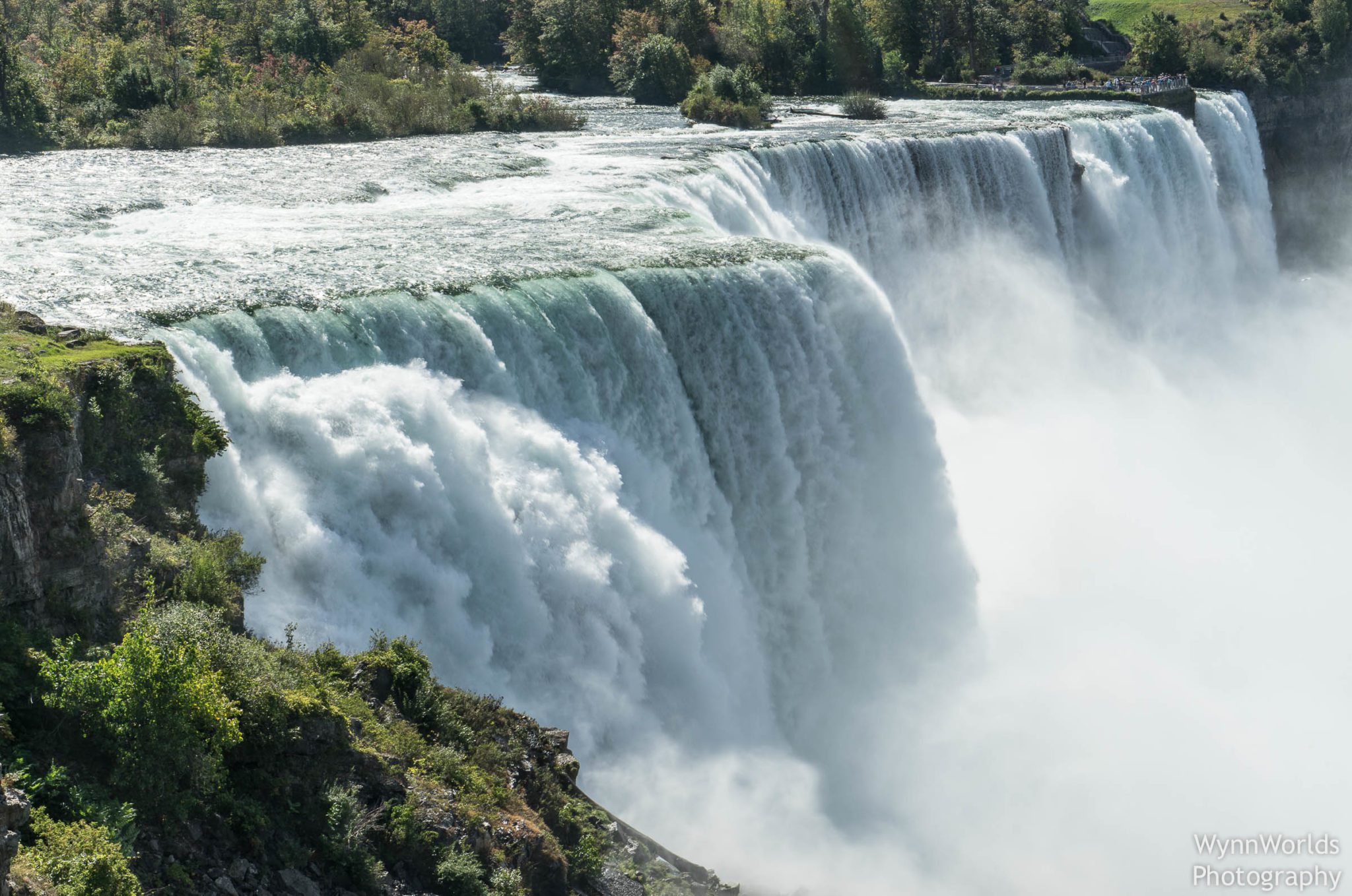 The wind made most of my little videos too noisy, but this one, of the rapids just above the falls, gives you a sense of the water’s power.

I know I said it last year, but I’ll say it again. If you are anywhere near Niagara Falls, you need to go there. It’s simply one of the most awesome displays of water on the planet.

One of the iconic names in American history is the Erie Canal in upstate New York. From 1817 to 1825, men and horses dug a 363-mile path from the Great Lakes to the Hudson River, providing a faster way for goods to flow to and from the Northwest territories (Illinois, Indiana, Michigan and Ohio). In providing a waterway to the heart of the continent, the Erie Canal changed history, providing a critical supply line during the Civil War and making New York the financial capital of the country. 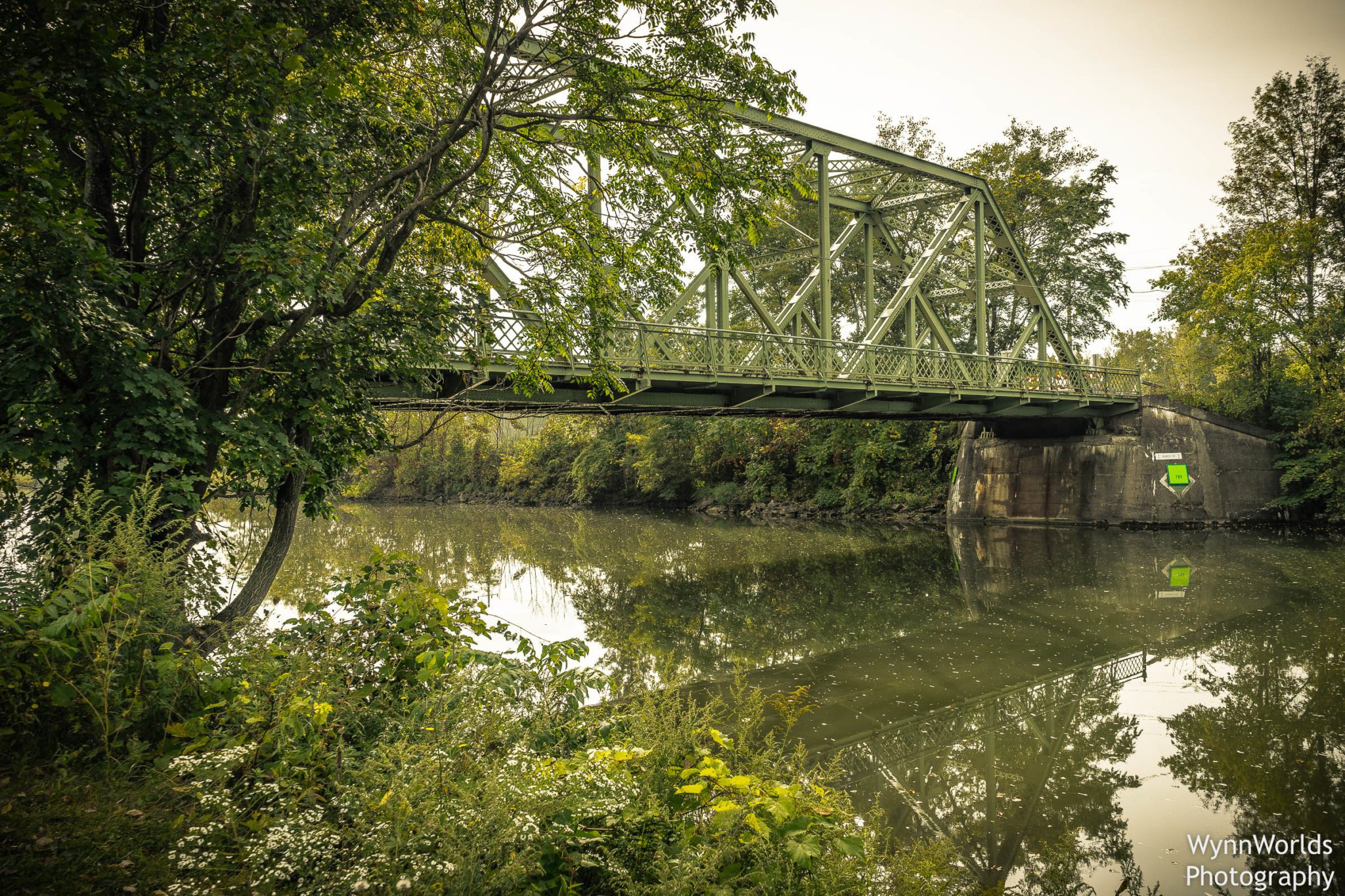 First, a short geography lesson. The image below shows the path of the Erie Canal, from Buffalo on the eastern end of Lake Erie to Albany on the Hudson River, where traffic takes a right and heads south to New York City. There are two smaller canals that connect Lake Ontario and two of the Finger Lakes. In the days when roads were dirt (or mud), water was the faster way to travel.

There are actually two Erie Canals, the original brick-lined path that meandered across the countryside and is now abandoned, and the newer, straighter, concrete-lined canal that is still in use today.

Meet one of the oldest locks from the original canal. Lock 60, in the tiny town of Macedon, is now a historic site that is maintained by two dedicated old guys. I met one of them, a talkative guy named Bill, and learned a lot about the old lock system. As you can see, the original canal wasn’t very deep or wide. The tops of those walls were where the mule teams pulled the barges through the water.The indented parts of the wall where were the wooden gates could be pulled flush against the bricks to let boats pass with maximum clearance. 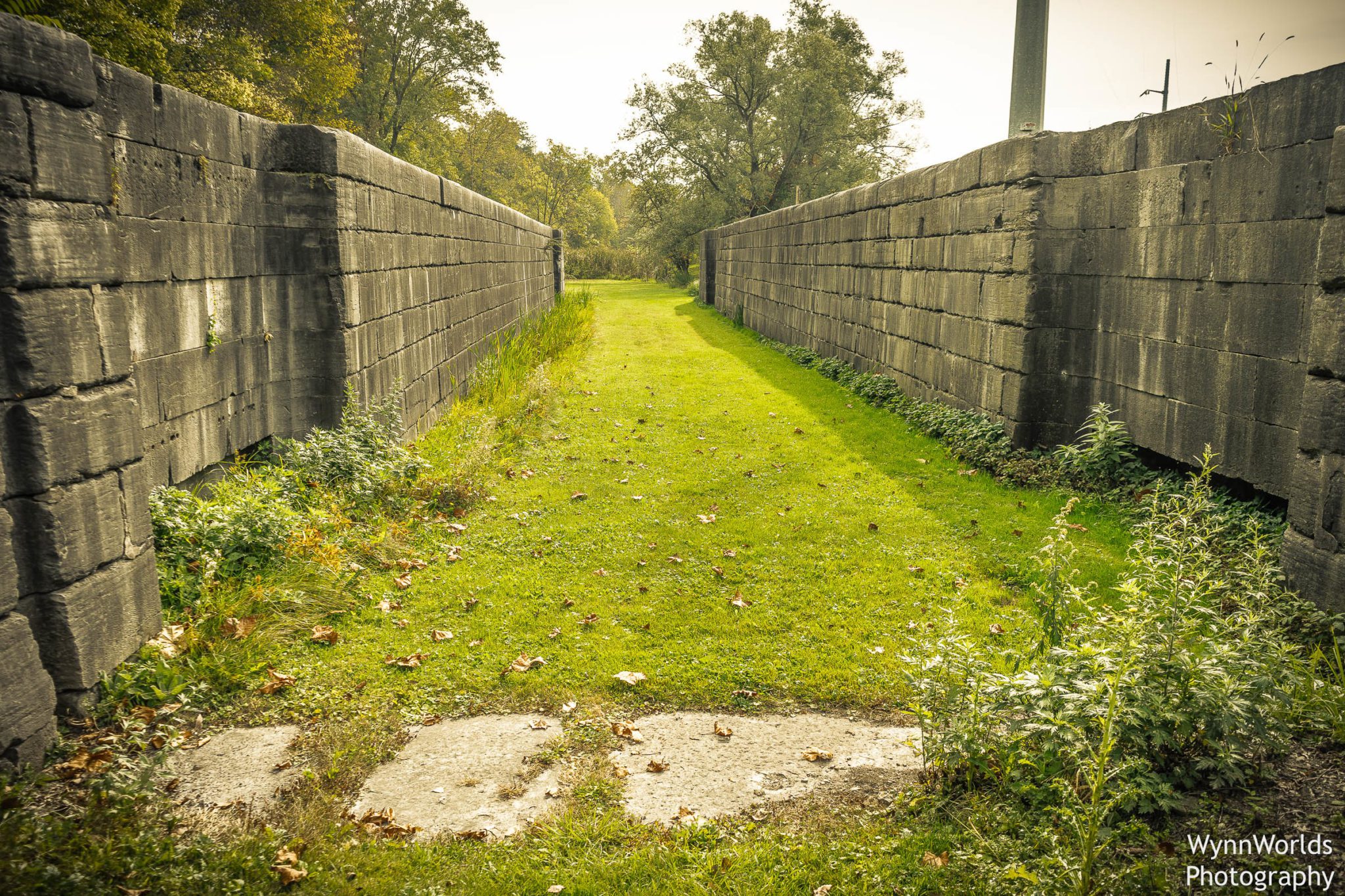 Bill also showed me the odd curved cement pathways that were used by the lock workers to give themselves better leverage as they opened and closed the gates. Here’s a good look at one of them at Lock 59, another old canal stop. 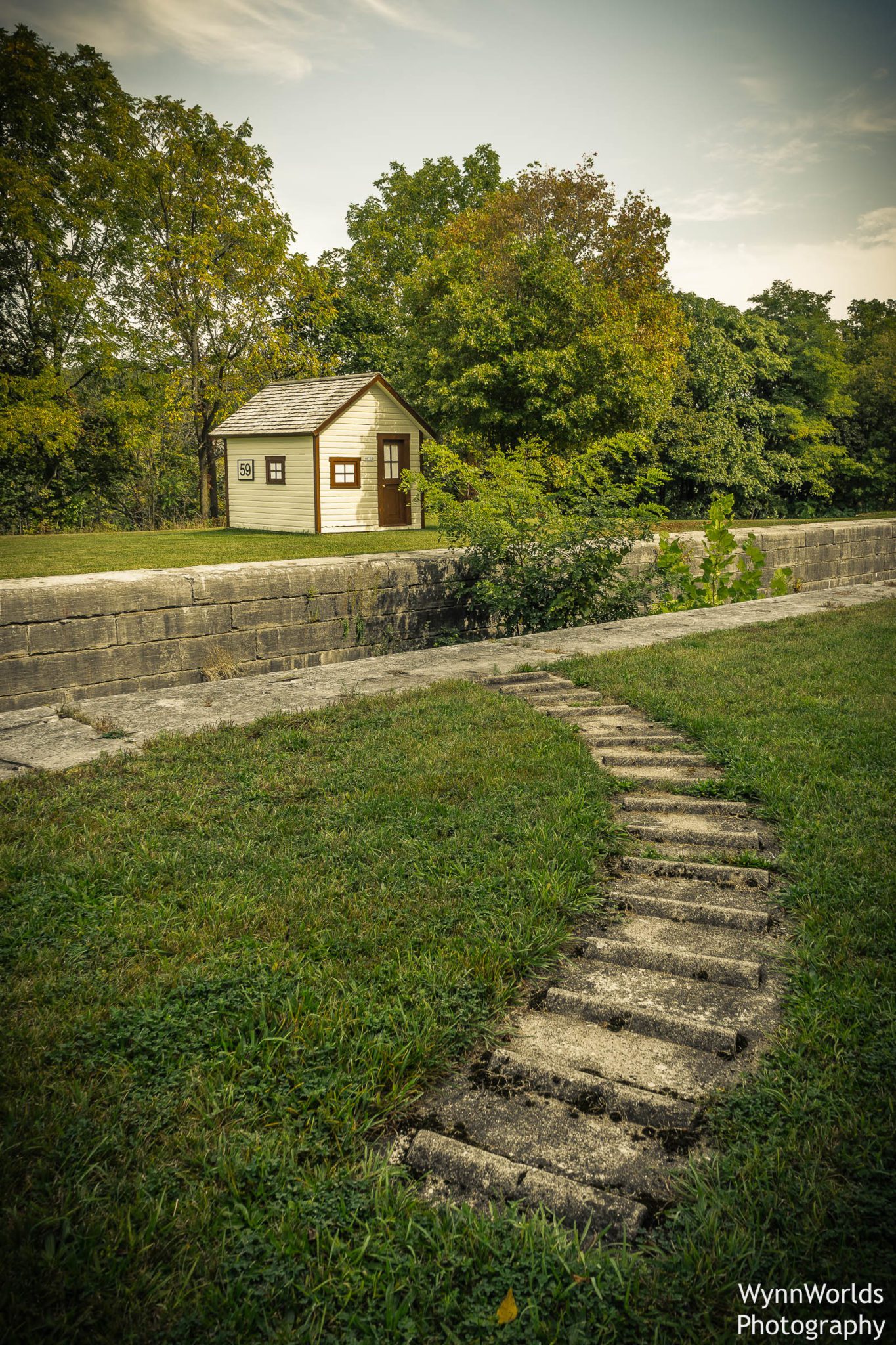 Over time, the canal was straightened, widened and deepened to handle the demands of more commercial traffic. It’s still not that wide, but then most of the cross-country commercial shipping has moved to trucks and trains so there are few working barges on the Erie Canal any more. 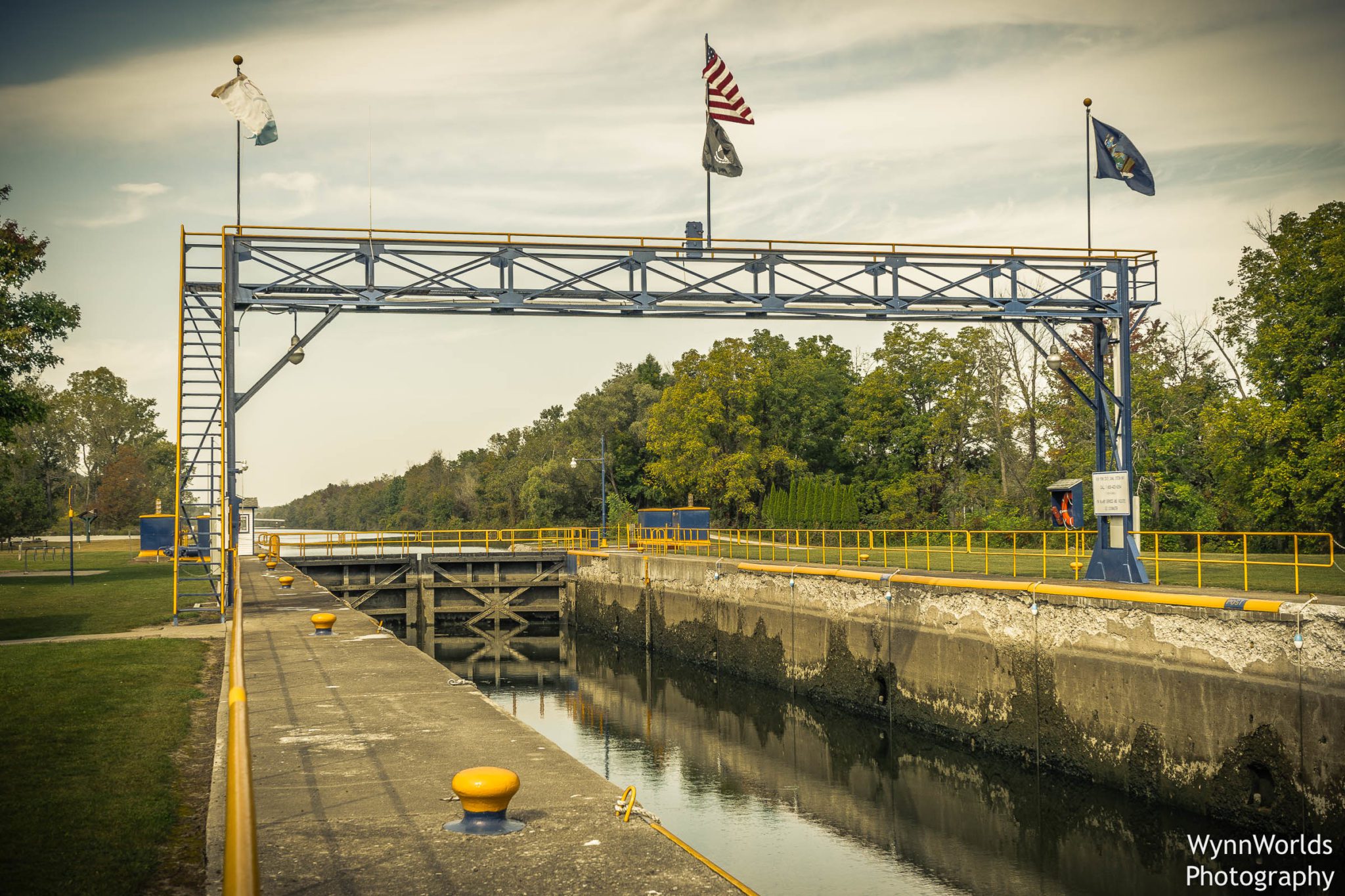 Each lock has a control booth although most of the workers seemed to be doing maintenance and not dealing with boat traffic. They do a good job of making things look good, every lock sporting the iconic blue and yellow colors of the New York State Canal System. 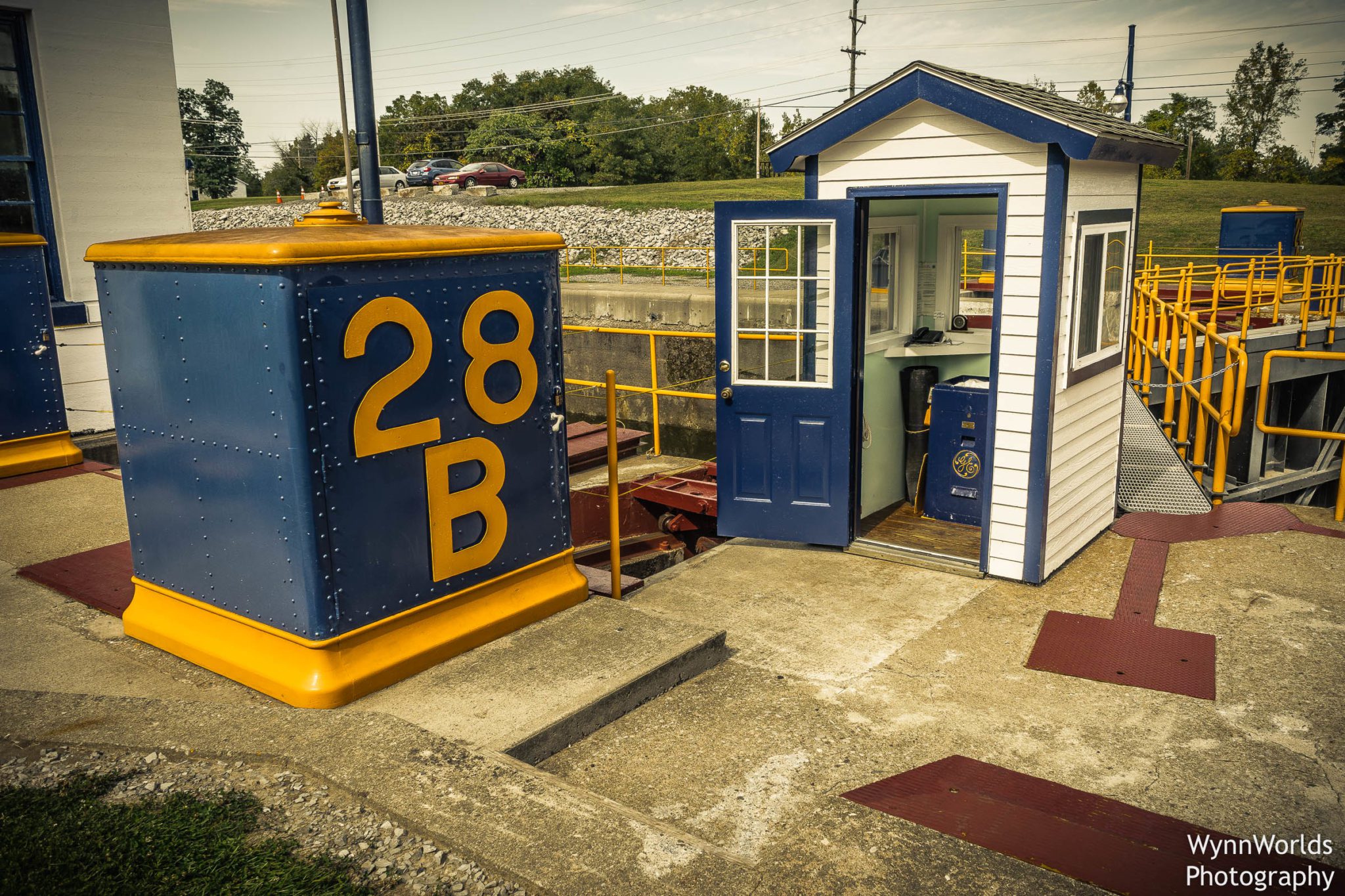 The section between Macedon and Lyons had several locks and I visited them all in a day. This was my favorite shot. 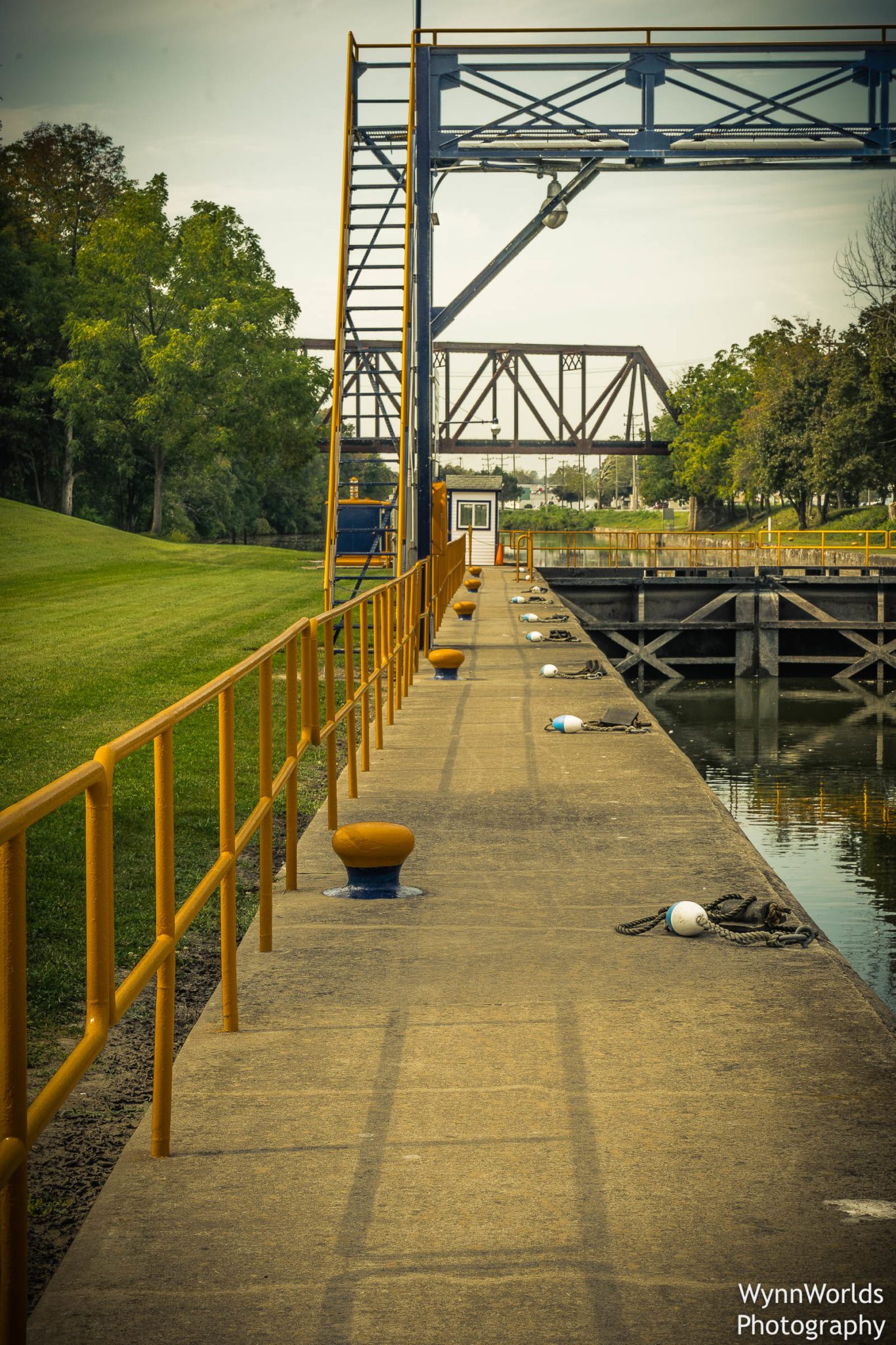 At Lock 28B, I walked down to the canal under the car bridge and got this view that shows a set of closed gates. Someday, I’ll see them in action, because watching traffic go through locks is pretty fun. I did that with my Dad in Seattle one time and we had a blast watching the lock team stack up the boats and then pass them through. 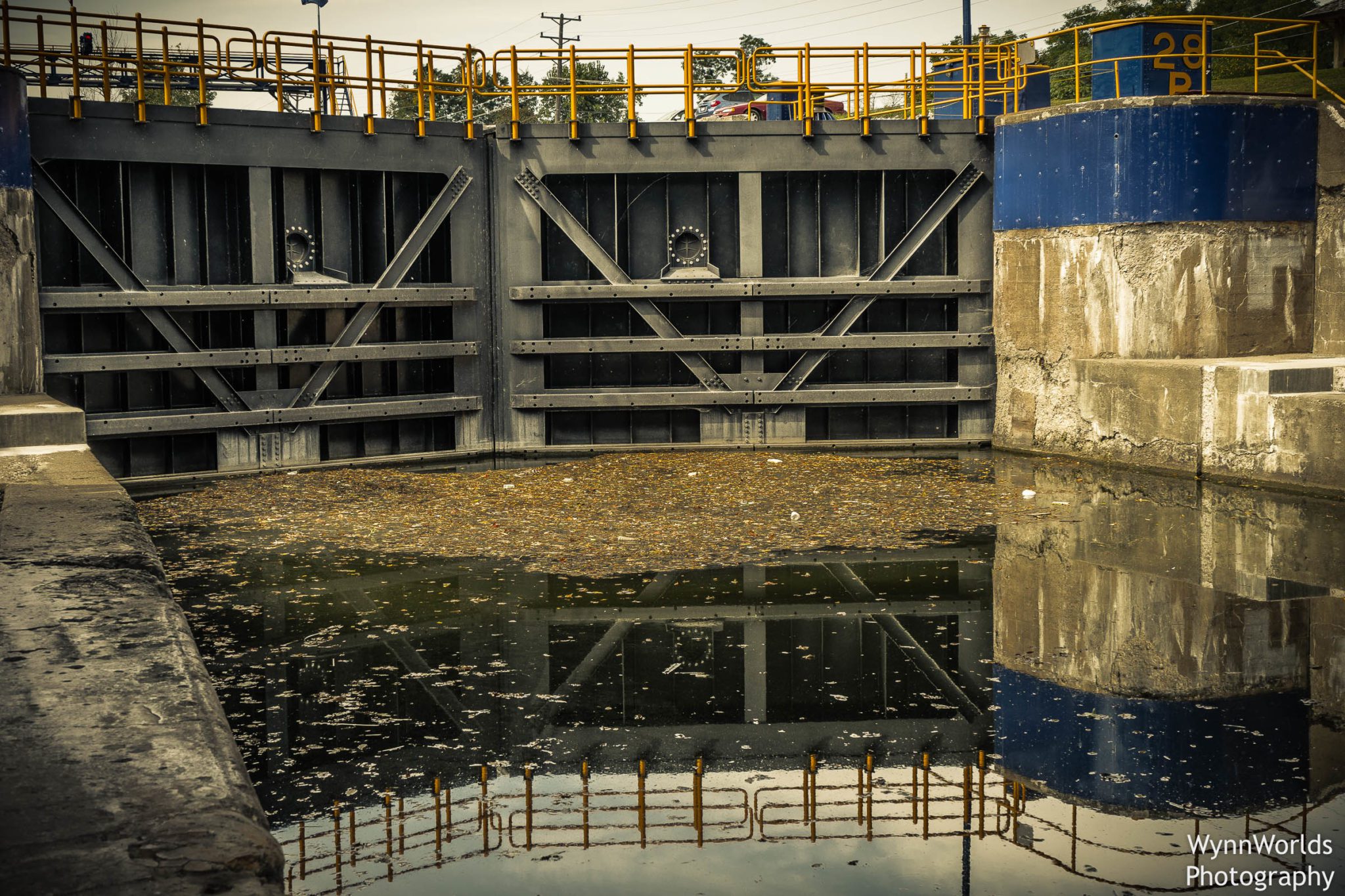 There’s also a bikeway from one end of the Erie Canal to the other, and many parks along the path as well, so it’s quite an enjoyable area to explore. It’s a part of American history I have enjoyed exploring. You can start with this link if you want to read more about this wonderful waterway.

History is not a burden on the memory but an illumination of the soul.

As promised, here are my favorite “not black and white” artworks from the Corning Museum of Glass. The combination of technique and brilliant colors in these pieces mezmerized me.

This was probably my favorite piece, a flock of abstract boats made by a Venetian while living in Seattle. These pieces float in the air, moving ever so slightly in unseen slight winds.

No idea why the title “Blood Sugar” but the chaotic and yet somewhat organized display of bottles, vases, and glasses is just so appealing to me.

When this artist hears music, she sees colors. Once I learned that, this bowl was even more beautiful and it made me wonder what music she was listening to that inspired its creation.

The glow in this bowl, with the tiny bubbles on the edges of each scallop, was simply brilliant.

If you’re going to have fun with glass, this is the way to go. The whole piece was so comical but this part was my favorite.

What struck me about these pieces was how each artist started with the same material (glass) and created something so amazingly different from everyone else. Truly artistic vision at work and incredibly inspiring to me as a photographer.

Color is my daylong obsession, joy, and torment.