If you thought Lancaster County had cornered the market on covered bridges in Pennsylvania, you’d be wrong. Somerset County holds claim to ten such bridges, so of course I went in search of some of them one sunny afternoon. And by “in search of” I mean that there’s not one website with all the GPS coordinates of these things and even Google Maps didn’t get a few of them right so I was literally searching the countryside at times. Oh, well, it was a pretty day and the countryside, both forested and farmed, was lovely scenery, easy on the eyes. I had tunes on the radio, a full tank of gas, a charged-up Sony A7 camera, and the whole afternoon ahead. 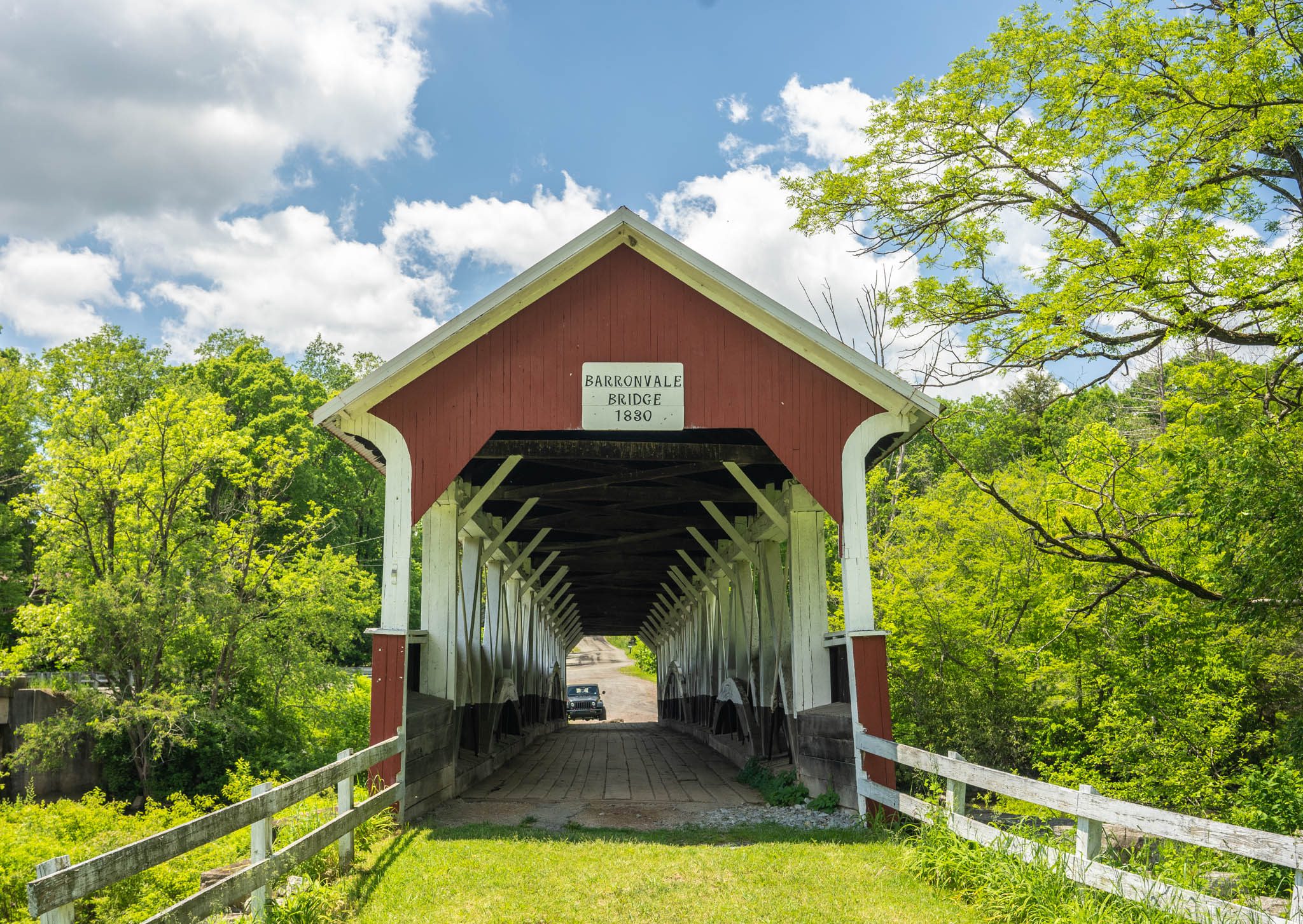 I wasn’t even trying to find the first bridge I came across. I had been looking for a scenic viewpoint near the campground but I got turned around by a construction detour. Trying to get the Garmin GPS to get me back somewhere near the scenic view, I turned down a side road to pull over but realized the side road was literally named “Covered Bridge Road” so I kept going another half mile till I found it. 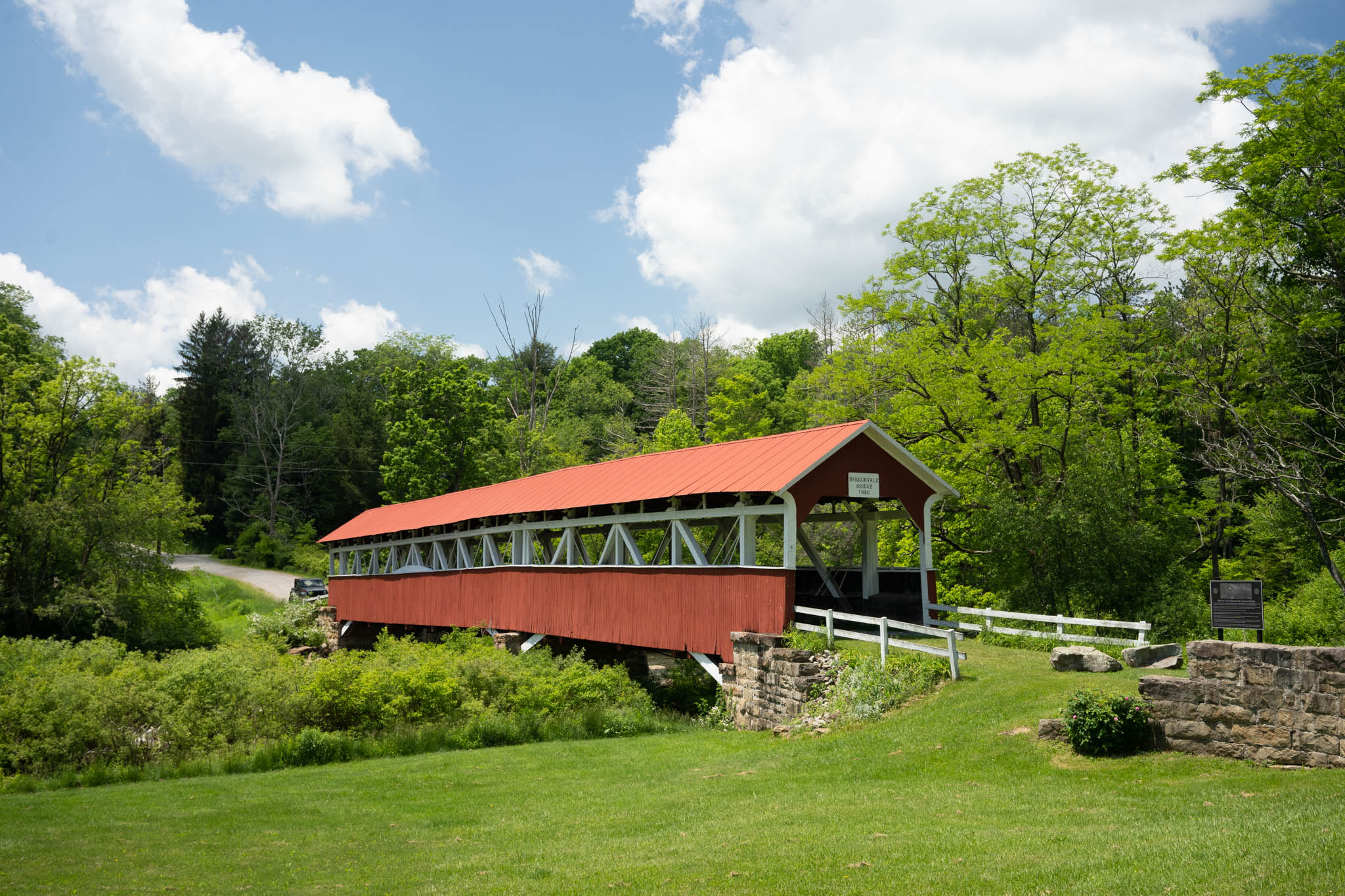 The tenth covered bridge constructed in Somerset County, this bridge was originally for customers of a local grist mill, and cost $300 to build. At 162 feet, it is the longest of the county covered bridges. You can’t drive through it any more, so I stood at the entrance and shot through to the other side with my camera. 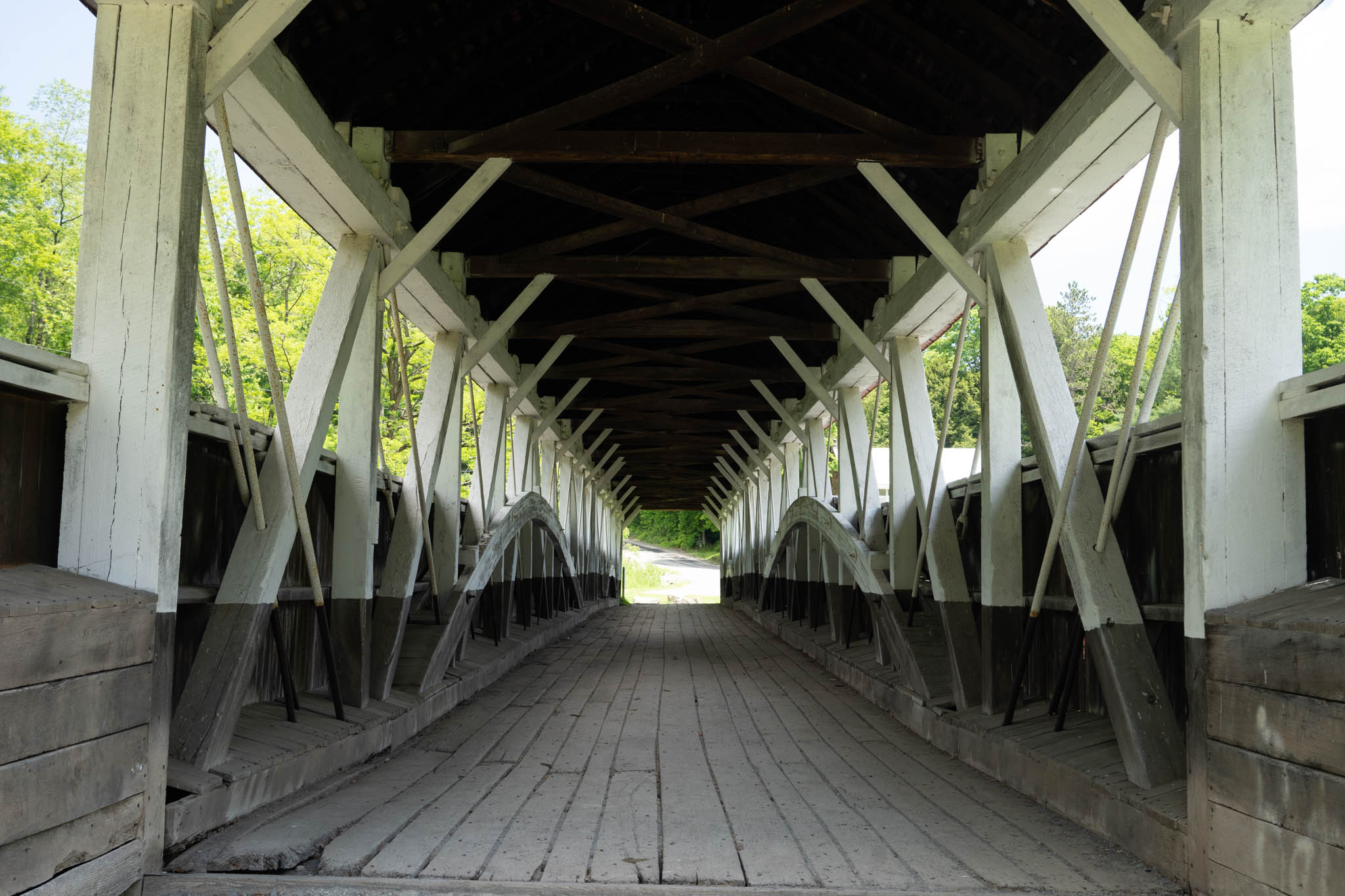 The construction here started with king post beams, with the steel reinforcing rods and burr arches added during a reconstruction in 1907.

On the way to my second target, I completely missed the mark, driving what turned out to be a big loop around the bridge without actually figuring out how to get there until I spotted a tiny sign that said “covered bridge” with an arrow pointing down a dirt road. Thankful I wasn’t towing, I headed down the single track road, which turned sharply and then dove down to… a red-painted covered bridge. I’d bagged my second bridge of the afternoon completely by accident! 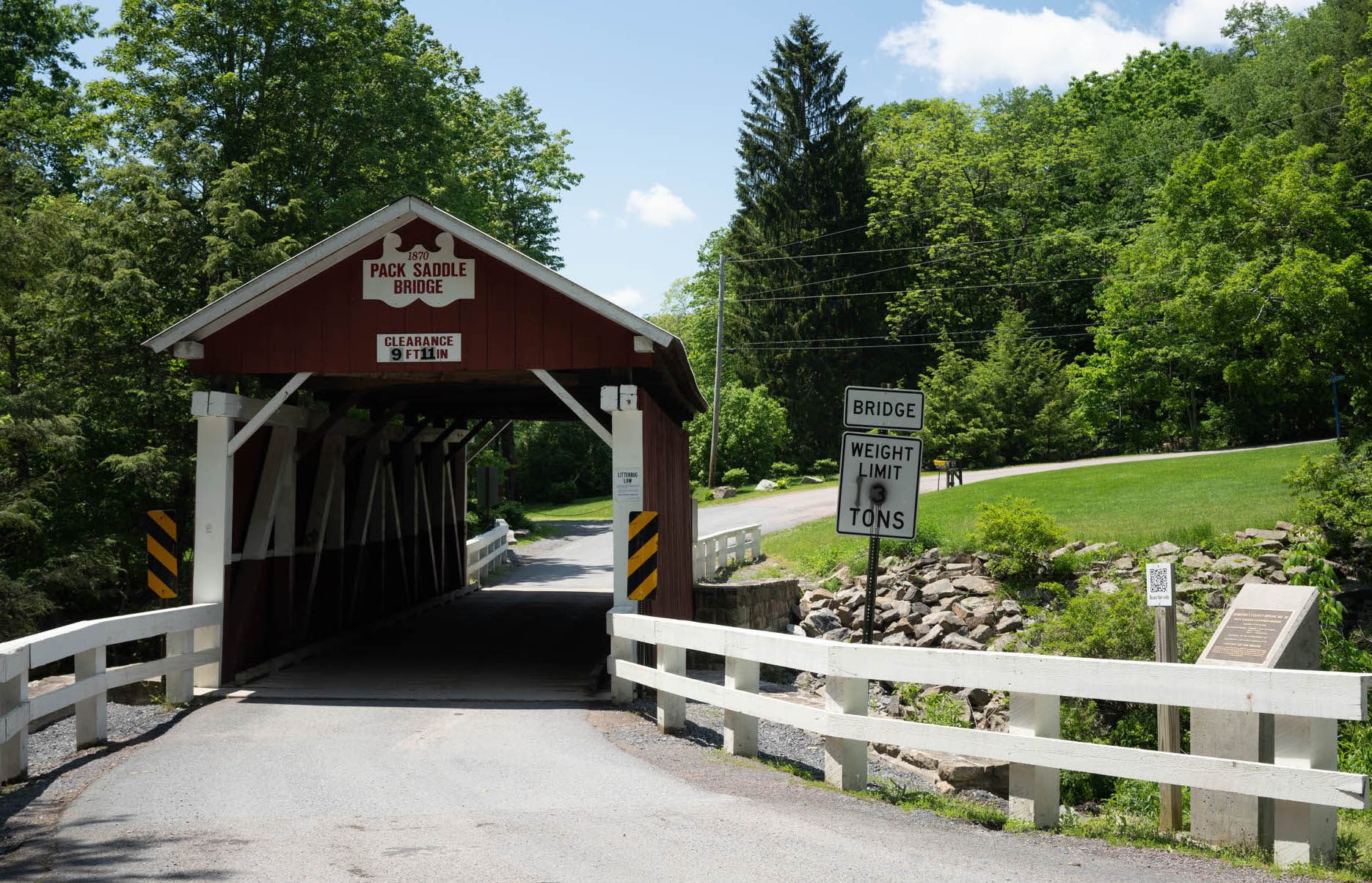 This bridge uses the king post style truss, which is a fancy way of saying it looks like this inside. Yes, I drove through this one because the UPS truck did it so I figured it could hold my Ridgeline just fine. 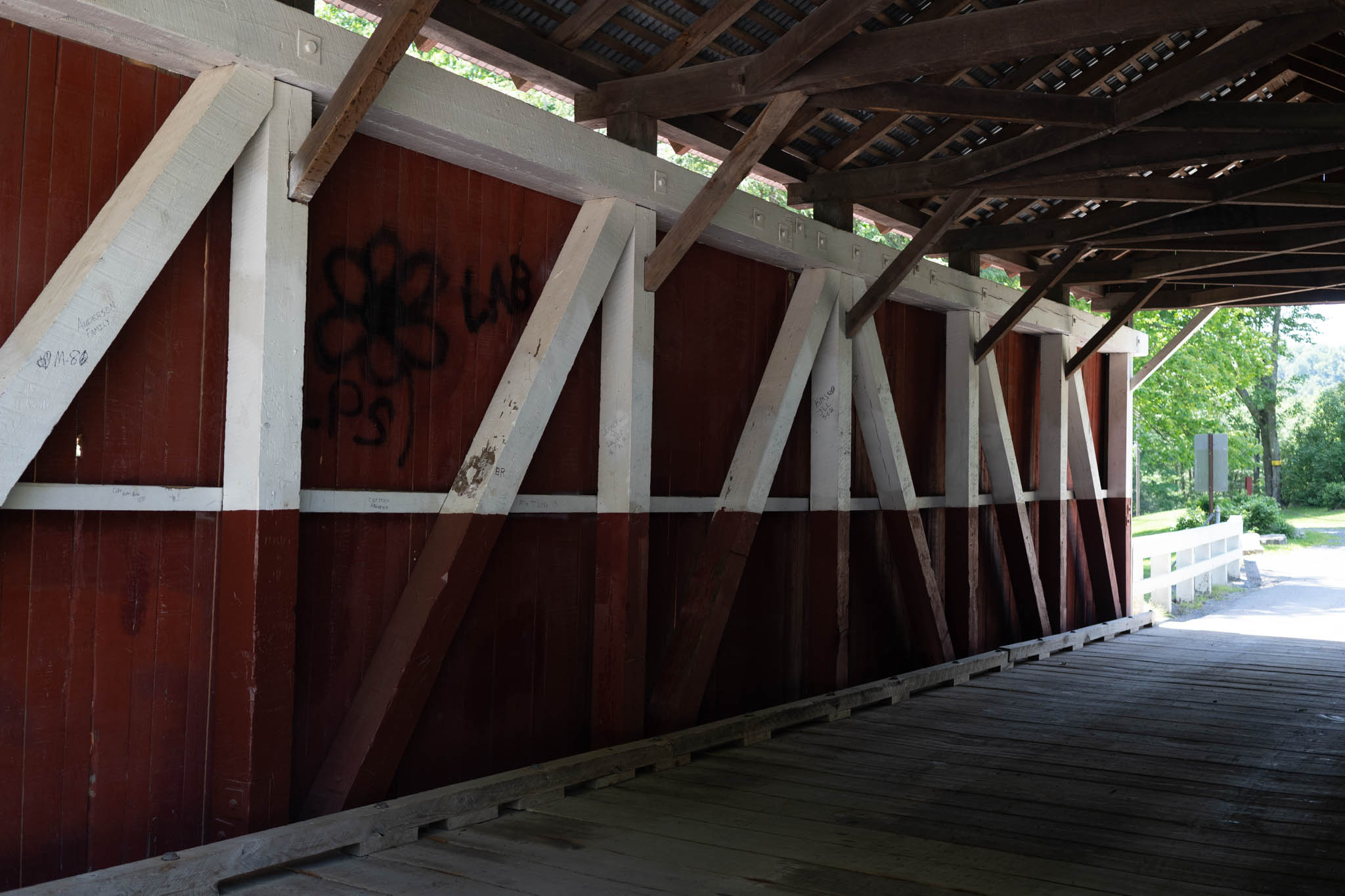 Pack Saddle is most famous for being the only covered bridge in the county that sits on top of a waterfall. It’s a small waterfall as such things go, but it’s definitely more than a burbling stream, so I’ll go with the waterfall claim. You can walk down to the river below the falls and take a dip, which is apparently a fun thing to do on summer weekends. I can see why, it was probably 10F colder down there than it was on the asphalt road in front of the bridge, where I was standing to take photos. The UPS truck and I were the only traffic I saw in the 15 minutes I was there so standing in the road was pretty safe. 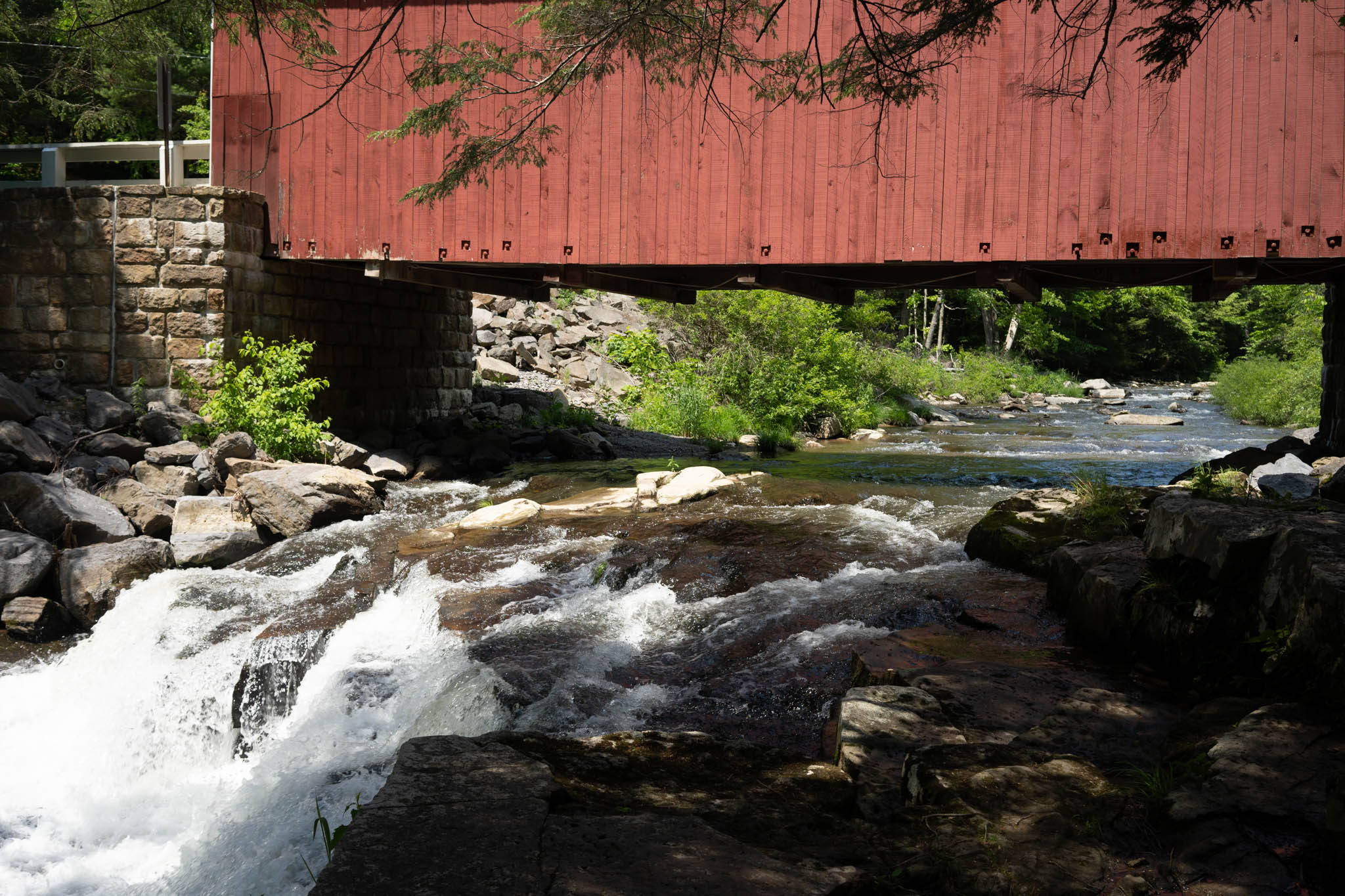 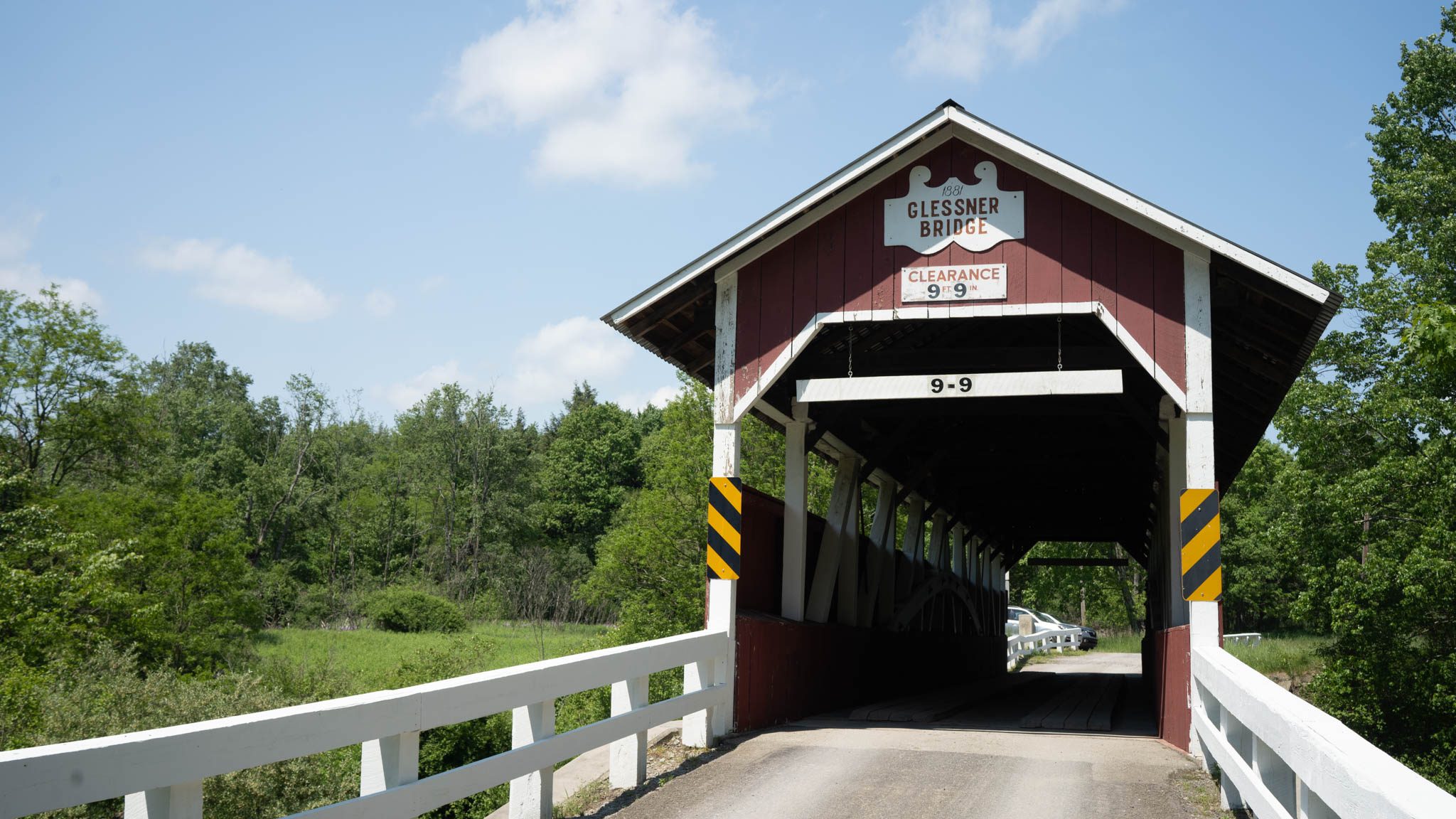 This bridge was one of the ones you can slowly drive across, so I did. You have to go down a rutted dirt road to get to it, so that cuts down on the number of vehicles. It was me and another pickup truck in the 20 minutes I was here, so the bridge doesn’t see many traffic jams. 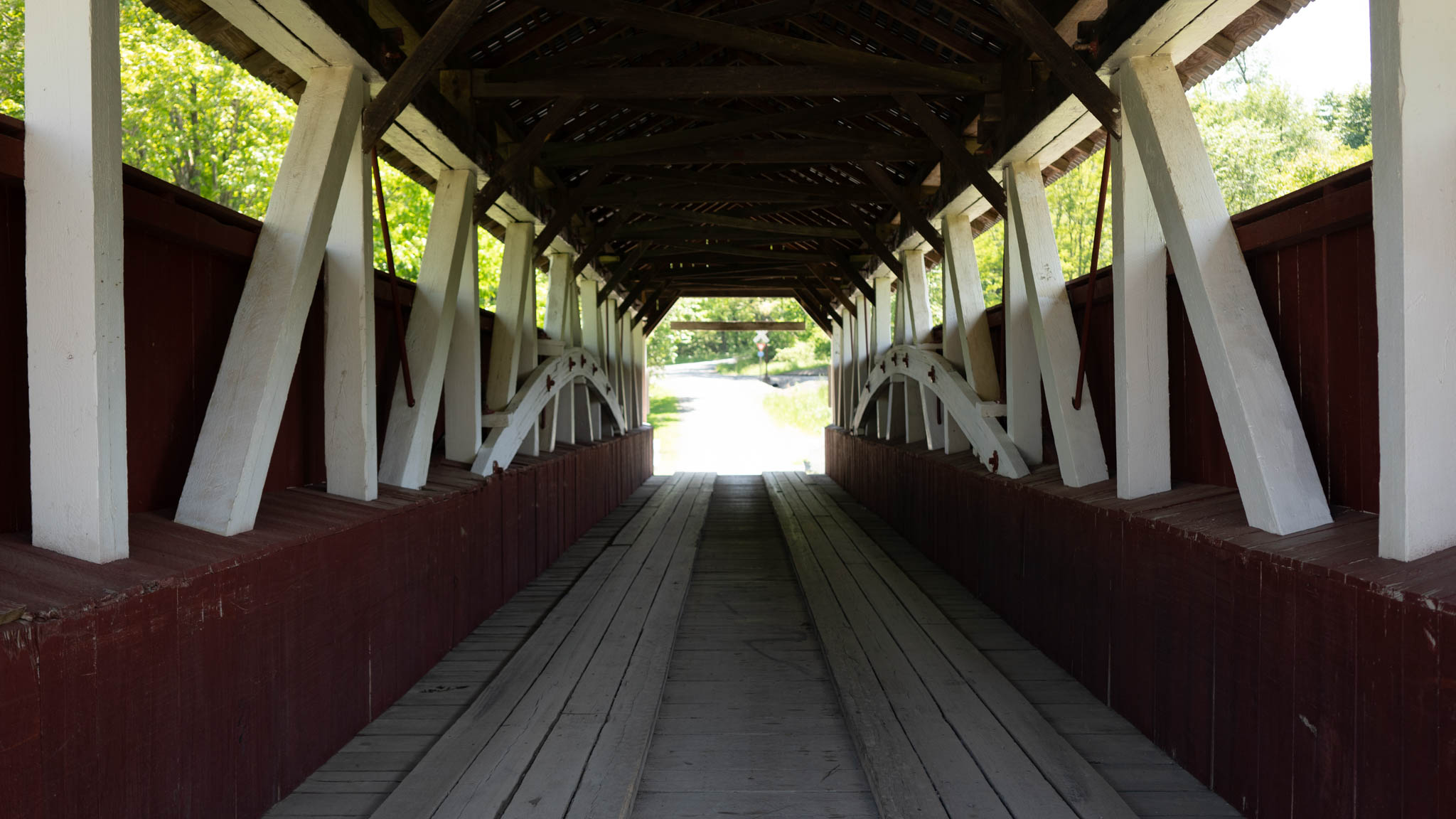 The construction here is a combination of king post trusses (the upgright and angled beams) and burr arch (that curved beam).

The other notable thing about this bridge is its location. Stoystown is just north of Shanksville, the closest town to where Flight 93 went down on September 11, 2001. (I didn’t visit the site this year, but I did in 2019 and wrote about it: Flight 93 National Memorial.) 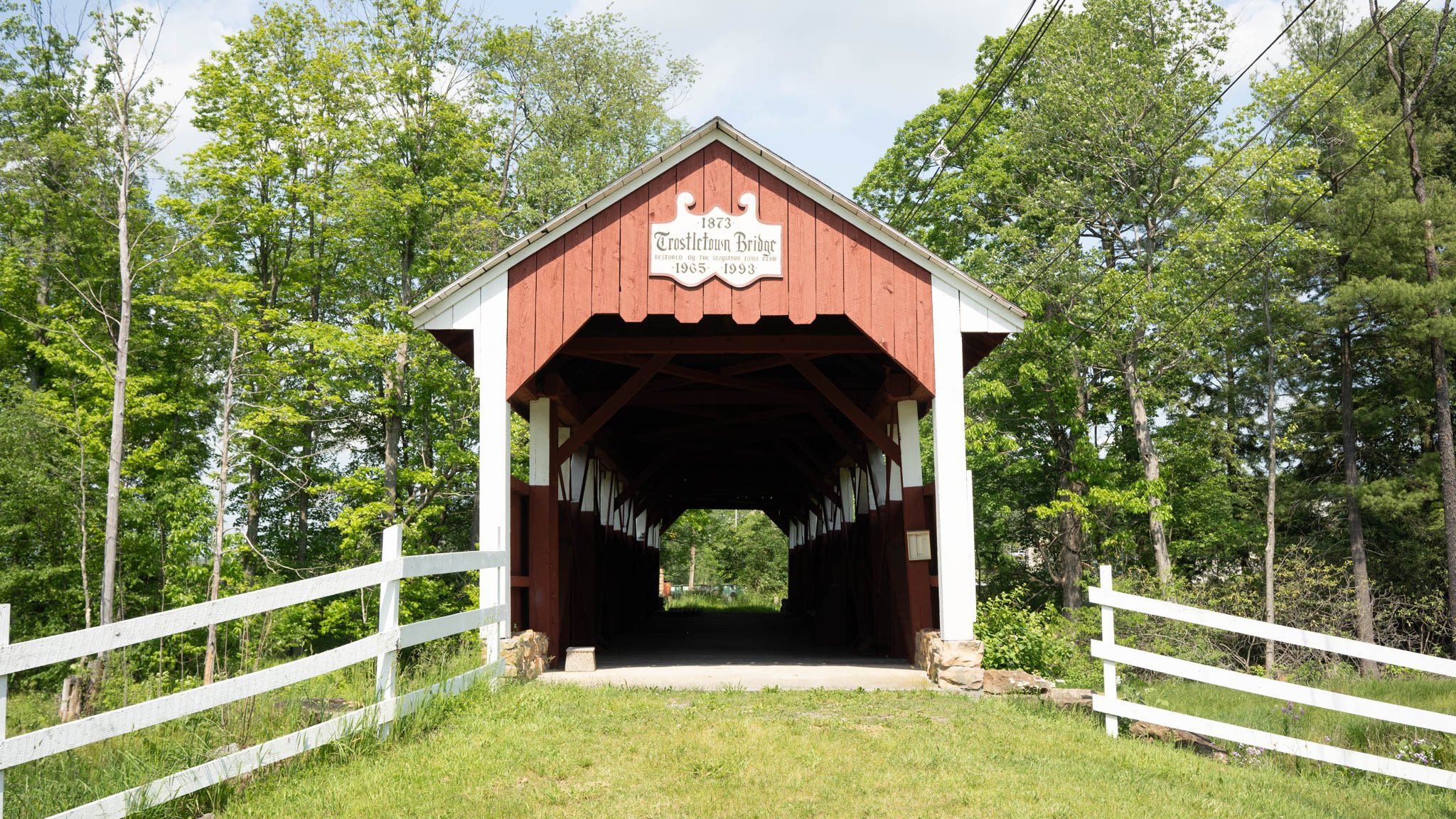 Farther west in Stoystown is the Trostletown Covered Bridge. It sits between a small logging mill and the local American Legion, and is closed off to all but foot traffic. The bridge is directly across the street from a private residence that seems used to people pulling up in the American Legion parking lot and then wandering over to the bridge, which is exactly what I did. Other than a friendly nod and their dog getting all excited, it was no big deal to them. 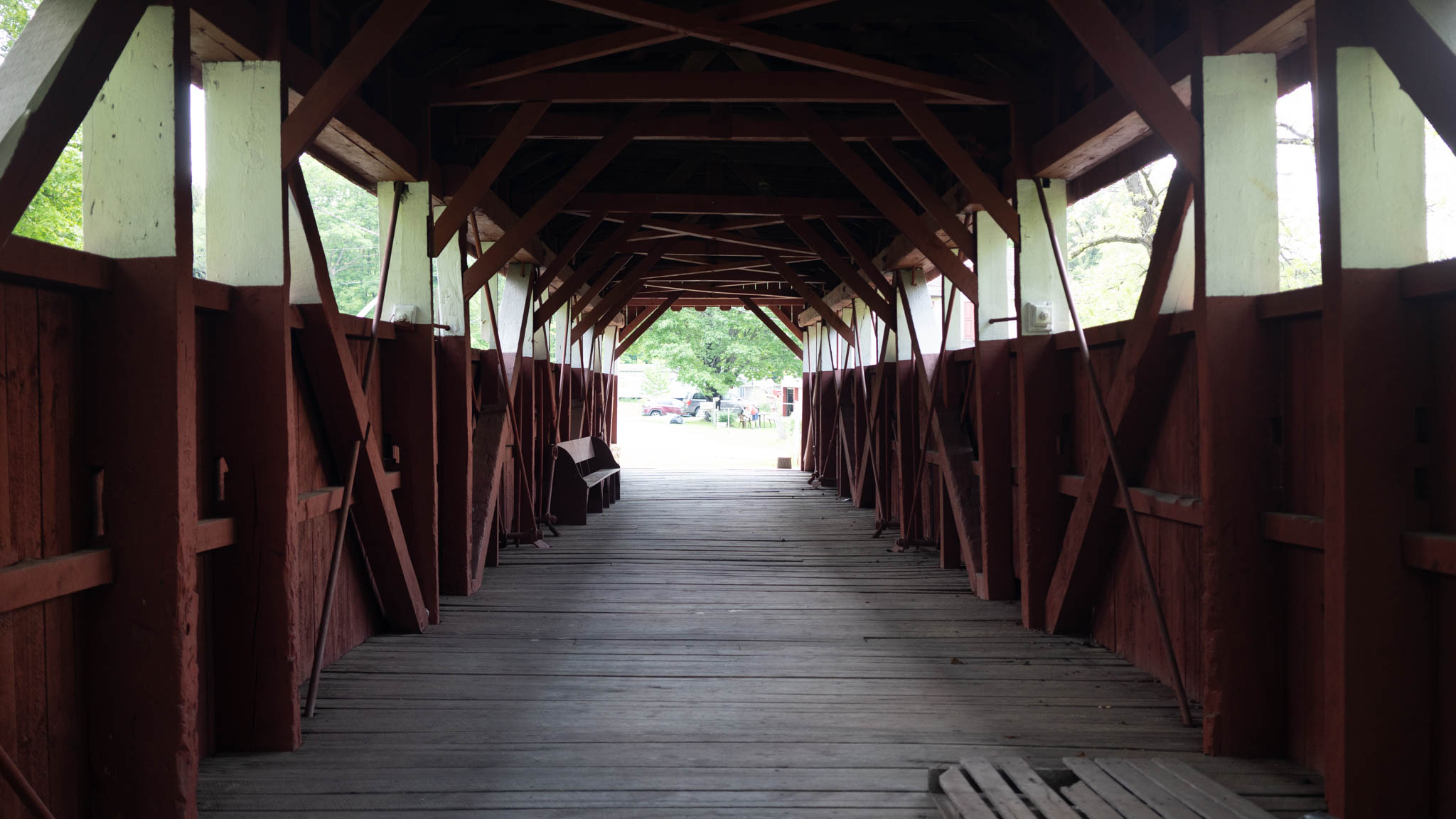 Both Stoystown bridges have what is called “half-height” plank siding, making for a larger opening down both sides. I found that a nice feature, although neither one was low enough that you could see the water below the bridge as you crossed. 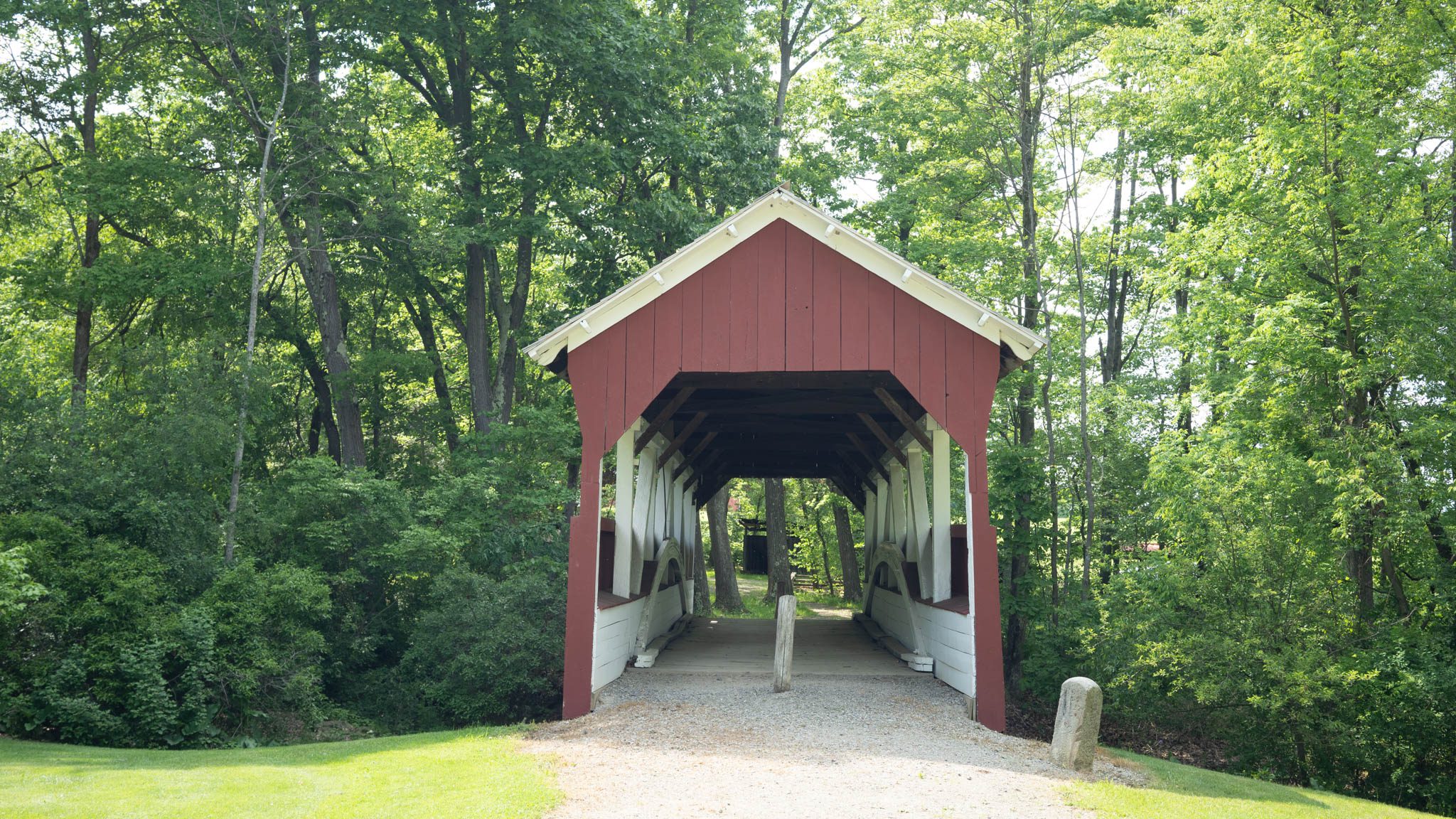 This last one was the most disappointing, as it really didn’t have a shine to it. Moved to the Somerset Historical Center in the early 1960s, it just kind of sits there like a sad little relic to past times. I kind of felt bad for it.

Luckily for me, as I walked back to my car, I got this shot and that made the stop worthwhile.

The hardest thing in life to learn is which bridge to cross and which to burn.