I’ve been taking back roads a lot more than interstate highways this year and enjoying the slower pace immensely. Instead of a 65 or 70 mph speed limits and a never-ending convoy of 18-wheelers, it’s more like 45 mph and one or two cars every 15-20 minutes. Sometimes, I’ve gone more than an hour without seeing another vehicle in either direction. Americans may have adopted high-speed road trips, but count me out.

But it’s not all smooth sailing off the interstates. Here’s a look at a few things that have recently harshed my mellow while cruising the back roads of Pennsylvania, Ohio, and Indiana. 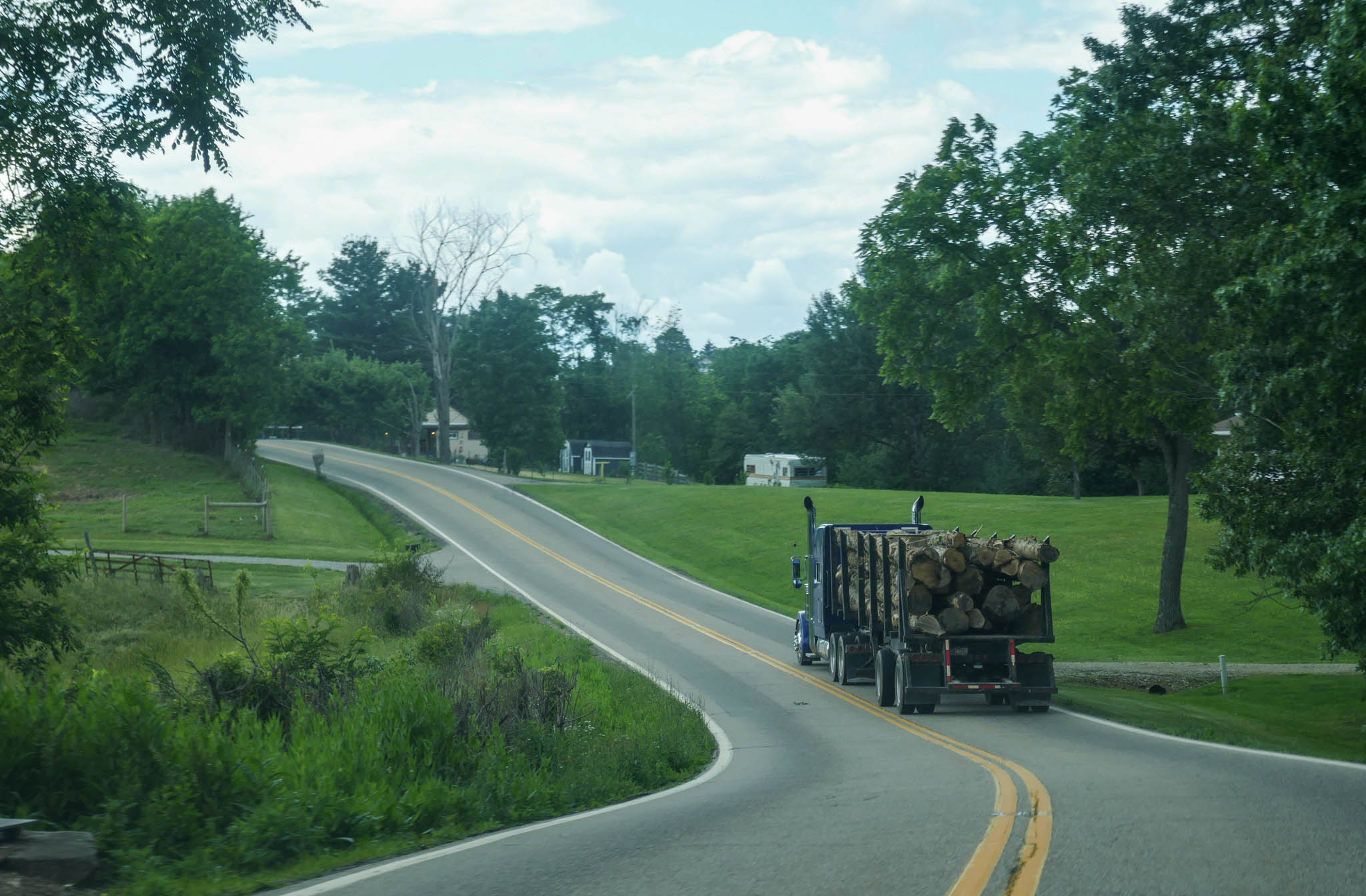 Logging trucks are not as infrequent as you might think on two-lane roads in what I think of as mostly farm country. I guess it makes sense; forests aren’t exactly located off major highways and the logs have to get from forest to the mill somehow. I’m just always surprised when I see one while I’m tooling through the middle of nowhere.

The truckers do go slow, though, because they have to negotiate the twists and turns of country roads, so they go about as fast as I do. If I’m following them, I don’t mind it too much. If they’re following me, I do try to get out of their way as soon as I can safely pull over somewhere. I did that a few weeks back, using the parking lot at a little grocery store in the middle of nowhere in southeastern Ohio. I ended up having a nice conversation with the owner about the storm that had come through the day before, while I bought a diet soda and a snack as a little payment for using the space out front. 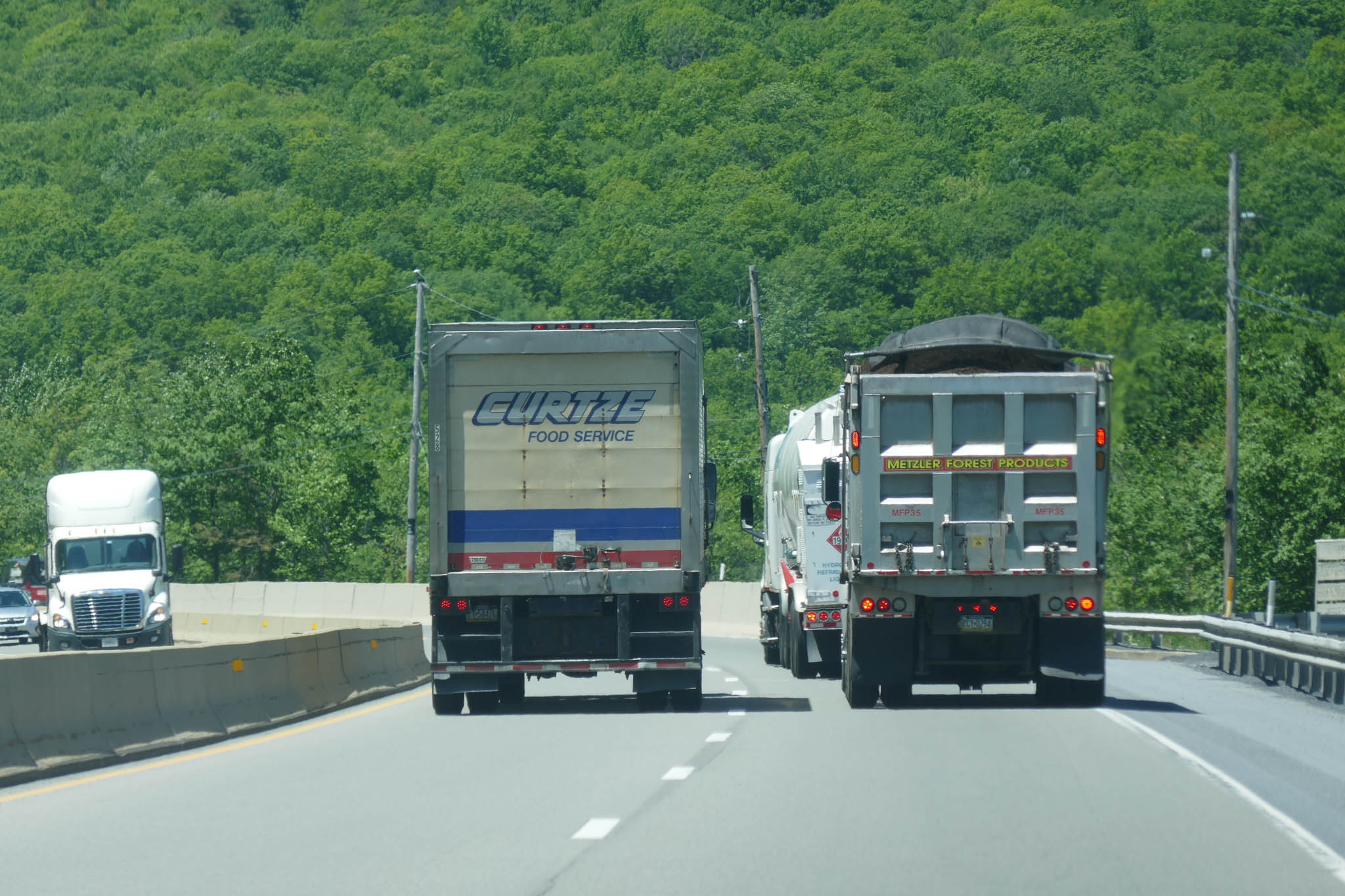 Sometimes the two-lane road turns into a four-lane one and then some trucks just gotta do their thing. My dad used to call this a “turtle race” because neither the truck passing or the one being passed are going close to the speed limit, so traffic backs up behind them. Well, all the traffic except me because I’m that trailer rig in the slow lane watching the big dogs fight it out and going my 55 mph happy speed. 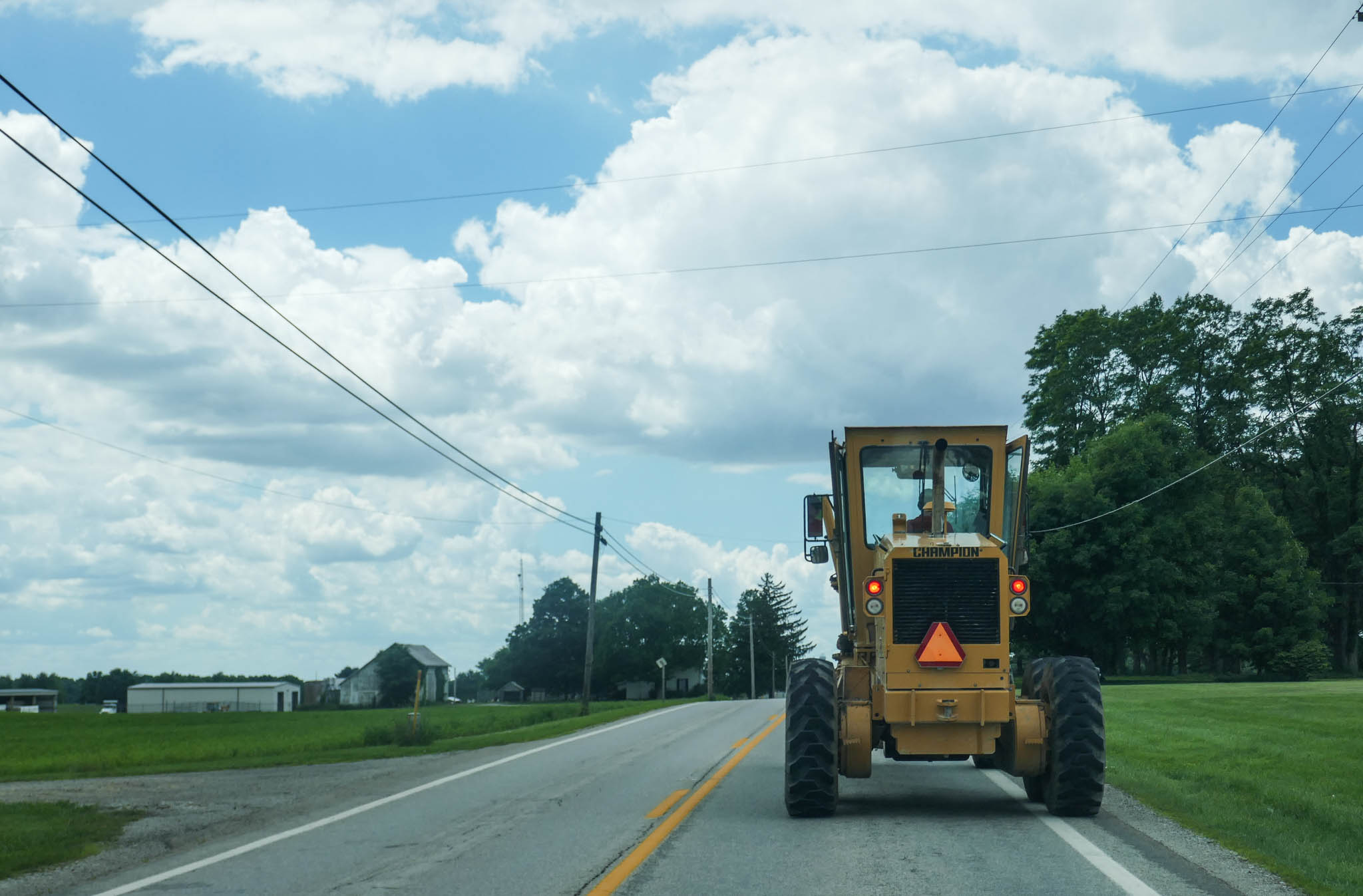 As you might expect in farm country, sometimes I come up on tractors, combines, and stuff I can’t even name moving on down the road. Sometimes they are so wide that I can’t pass them at all, so I just follow behind and wait for them to turn off. This one, though, was small enough to pass and he also moved half off the road when there was a passing opportunity. Nice farmer! I got by him easily and was on my way, me going 45 and him doing a much more sedate 15 mph in my rearview mirror. 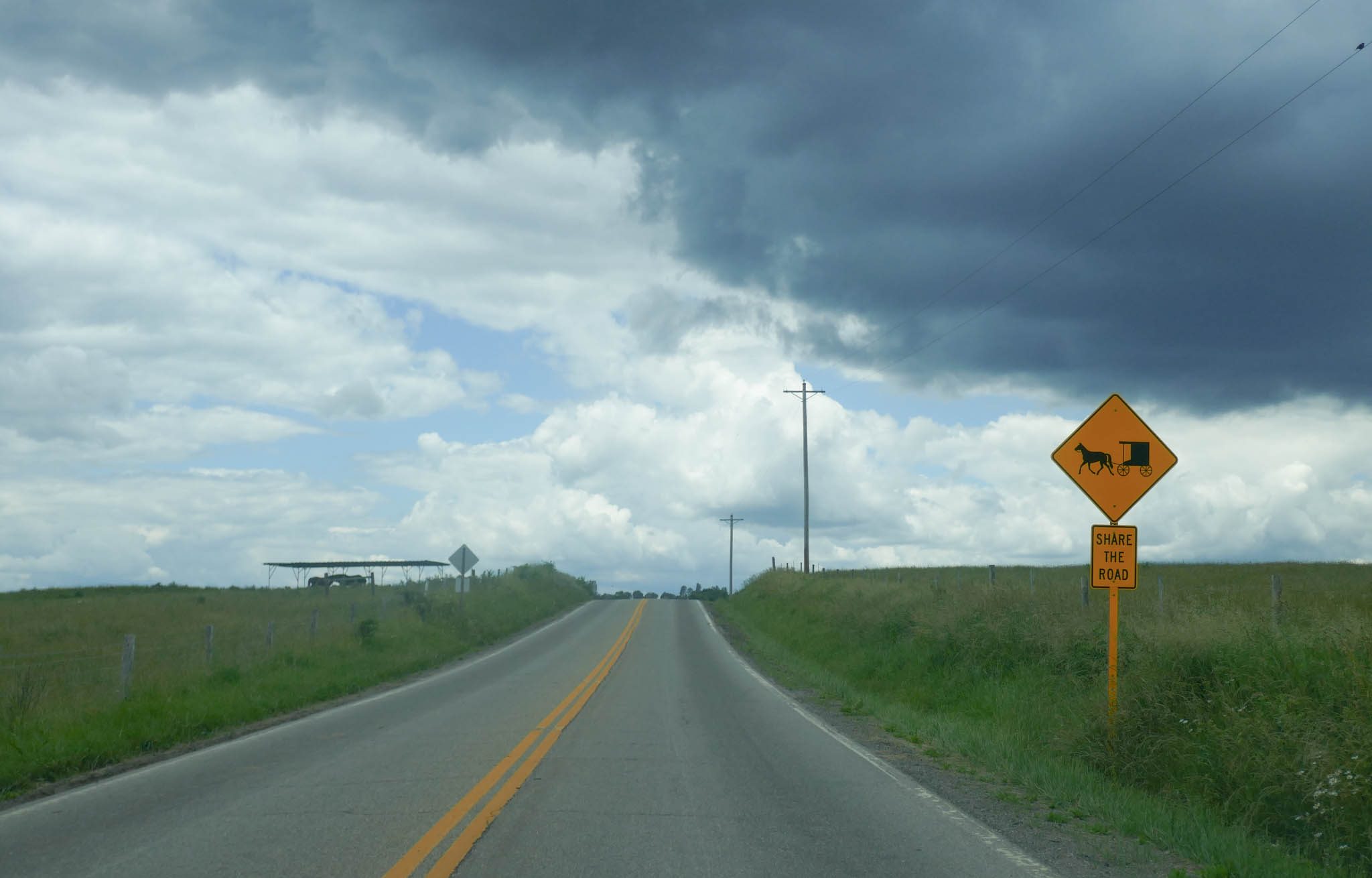 In Pennsylvania and Ohio (and probably other states, too), you might see a warning sign like this where there are Amish and Mennonite communities. My friend Peg taught me how to best pass a horse and buggy (slowly, and give the horse a lot of room before you move back over). That lesson has come in handy a half dozen times in the last month, so thanks, Peg! 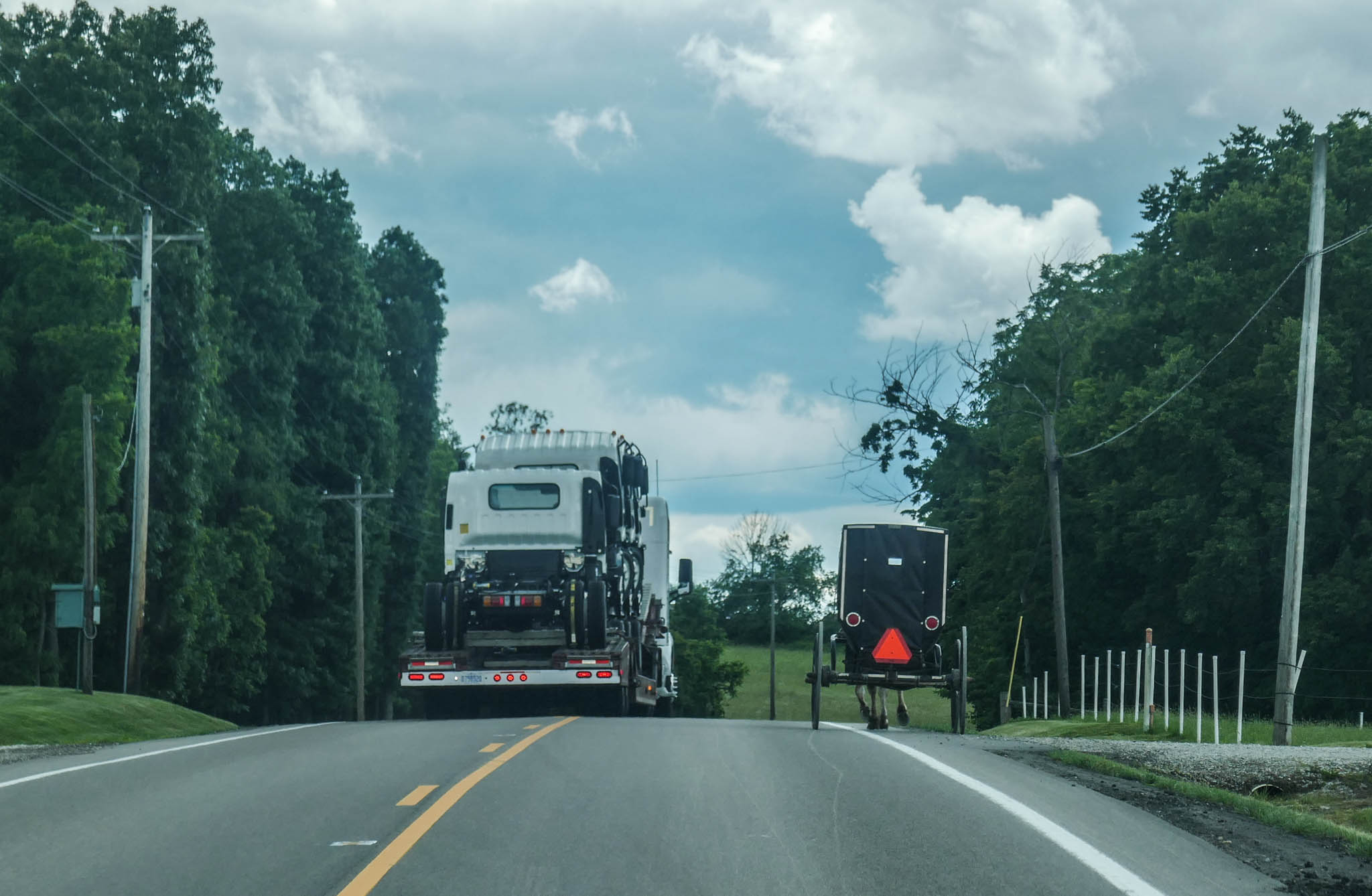 I love this shot because it’s not just a car passing the horse and buggy, it’s a truck hauling other truck cabs! I wish I could have seen the buggy driver’s face as this passed him, but then again, he was probably just as stoic-faced as usual. Buggy drivers never give me a second glance when I pass them either direction, but I have had their kids’ heads swivel around to check me out. Maybe I’m inspiring some little Amish kid to think about hitting the road.

When I’m on back roads, I don’t mind  pulling over at the nearest, safest opportunity (gas station, parking lot, etc.) if there is even one car following me. Something about following a trailer sets some people off, so I like to let them go. And if they are tailgating me, thinking that will make me speed up, I’m even happier to get them off my back bumper. So if you’re on a back road and come up on a little blue trailer going slow, don’t worry, I’ll pull over as soon as I can and let you fly by.

The freedom of the open road is seductive, serendipitous and absolutely liberating.