In mid-July, I set out on a Southeastern adventure, partly to beat the Florida heat and partly because, well, that’s what I do, I’m a vagabond and my home is my trailer. It was my first outing since COVID-19 hit and that informed a lot of my planning before and behavior during this three month trip. (Note: I also tracked infection rates per 100,000 and death rates for counties and states where I was considering stays. In July, Florida literally had the highest rates in both categories for the Southeast, so it wasn’t like I was going from safety into danger; I was already in the thick of it just being in Florida.)

As with most of my journeys, I keep a map on my corkboard of where I am and where I’m planning to go. I don’t know why, it just makes me happy. Green pins are completed stops, and I use red for planned stops, with the blue pin being my current location. My route would be an arc, heading up to the mountains and then sliding back down to Florida. 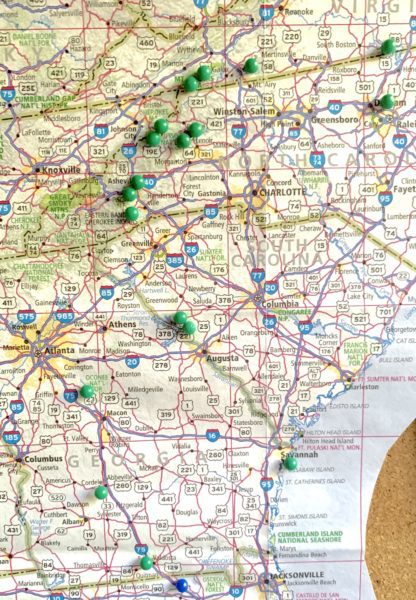 Slower pacing: I wanted to drive less and stay longer in places, so most of my reservations were at least 4 days, some were 6 or 7 days, and a few maxed out at the 14-day stay limit enforced by most state and national campgrounds.

Careful Campsite Selection: More than before, I pored over satellite views of campgrounds, read reviews, and tried to pick out sites that had plenty of room around them. About half of the campgrounds I stayed at were repeats, so I had a pretty good idea of which sites had more room than others. But that other half? In general, my picks worked out. Labor Day, always a crowded time in the campground, was probably my worst site of the trip, but since I’d only made that reservation 3 months beforehand, it wasn’t all that bad and with a tiny trailer, I can fit almost anywhere.

Stocking Up: Given the hoarding of food and paper products that went on nationwide in the Spring, I worried about not having enough, especially in areas without a big city nearby. I started with a lot of toilet paper and paper towels, a two big plastic containers full of food staples, and another one mostly full of cleaning supplies (hand sanitizer, wipes, bleach spray, and so on). I felt prepared for almost anything.

Ports in the Storm: By the time I started the trip, I had three places I could go to ground if things went nuts. And I was never going to be more than two days drive away from Gainesville, so if the world exploded, I could retreat and hunker down with friends there.

Masking Up: I started the trip with four cloth masks and two boxes of disposable masks. My plan was to wash the cloth masks after each use and only use the disposables if I didn’t have a dry mask. But, cloth masks with 2-3 layers ake a while to dry, especially when it’s humid outside (and the South is humid in summer, trust me on this one). I ended up using the disposable masks a lot more than I thought I would. I wore them to grocery stores and pharmacies where I’d just toss them after the one use, especially if I noticed more than a handful of people without masks.

Social Distancing: Pretty easy to do in a campground, right? Well, you would actually be slightly wrong there. One of the more popular things to do is walk around the campground, since they are usually loops and paved. Some people stayed safe distance apart but some wanted to walk right up and chat, with no masks in hand. Yikes.

Walking Out: There were a few stores that I walked into and promptly walked out of because about half the people weren’t wearing masks or had their noses uncovered (which I so don’t get). I figured I could always get by until I found another, better-masked, store at the next stop. This is where the food stable storage came in handy; I didn’t have to buy groceries if I didn’t need to. While my intake of fresh fruit and veggies suffered a bit, I still mostly got what I needed on the road.

Meeting Up: It was a somewhat delicate dance to arrange meeting up with friends, whether we were camping together or me just visiting their town. This is where we are in 2020: asking how your friends feel about wearing masks and social distancing, and if they are avid socializers or mostly stayed to themselves this year has become the norm. I was fortunate that my friends were mostly self-isolating, avoiding big gatherings and indoor eating, and so on. We still masked up, for example, at a friend’s house for an afternoon and evening of catching up. And when a larger group of us (six or seven people) gathered several days of camping, we all wore masks even outdoors, as one of us is looking at some serious surgery in November and getting sick with anything would have derailed their plans.

Campgrounds were BUSY: Usually after Labor Day, the demand for sites slacks off, even on weekends. But this year, no way. Campgrounds were usually full every night and reservation changes were hard to do. In a few cases, the small size of my rig (17 feet) got me a site that bigger rigs would have to pass on, such as my Labor Day weekend site. Technically, it was a 20-foot long site, double-wide, so my trailer was on one side, and my Ridgeline on the other.

Most people wear masks: Honestly, they do. But as the summer wore on into the fall, I saw more people without masks walking into Walmart or CVS or the convenience store at a gas station. Even Walmart, which had vigorously enforced wearing masks in July had mostly given up by September, and I can’t recall the last Walmart I saw with someone standing outside making sure you had a mask on. It’s such a simple thing to do, and shows you want to protect other people, so why is it such a big deal? I still shake my head whenever I see a maskless person proudly walking into the store as if they’re daring anyone to say anything to them about it. And no one does, especially not in states with concealed carry. This is America in 2020, and all of it makes me sad.

Most Stores are Well-Stocked: With the occasional exception of cleaning products, most stores had shelves full of food and supplies. I gradually relaxed and started using up my stash of food and supplies so that I was carrying less around with me. (I was also still figuring out how to most efficiently stow stuff in the Ridgeline without having to unpack completely just to get to that one thing I wanted. This is an ongoing adventure in access control.)

It was definitely different being a vagabond this summer and fall. No museums, no treating myself to an afternoon matinee of the latest movie, and very little meeting of fellow campers. People kept to themselves or their bubbles, so most interactions were with people standing 10 feet away and that kept conversations short.

I’m hanging around northern Florida till early January, exploring some of the state parks and planning on some airbnb time for the holidays. So still in motion, just a lot less mileage and a lot more Gainesville, which is my home base.

I like adventures, and I’m going to find some.