“The mind, once expanded to the dimensions of larger ideas, never returns to its original size.”

Oliver Wendell Holmes
One year ago today, I showed up at NASA’s Jet Propulsion Laboratory (JPL) at 8AM for a NASA Tweetup, where slightly more than a hundred people (all Twitter users) had been invited to spend a whole day listening to scientists, rover drivers, program managers, and programmers talk about their projects. I expected “amazing” and “awesome.” What I got was so much more…

I learned about the Dawn spacecraft that would use ion propulsion to study two asteroids, Vesta and then Ceres, and stream the information back to earth. The scientist spoke about spiral orbits and slingshot moves as if it was everyday stuff. OK, maybe it was to him, but to me, it felt like my brain was scrambling to find new cells to absorb everything. And that was just the beginning of the day. 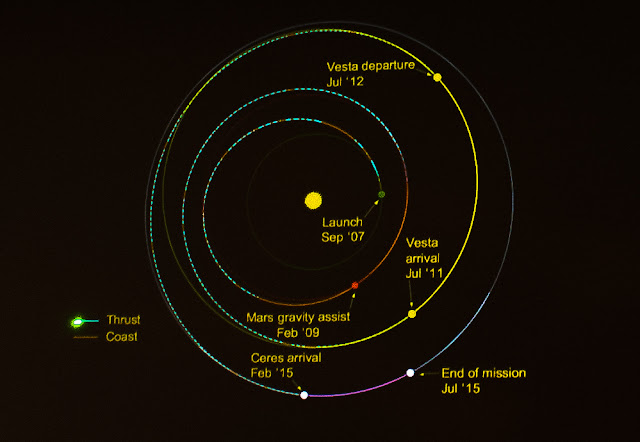 More than a dozen speakers took the time out of their busy workdays to share their knowledge and excitement about their projects. It was so awesome that “awesome” doesn’t begin to describe it.

Voyager 1 and Voyager 2, the original explorers of our solar system, were presented, with a great graphic that showed just how far it is to the end of our solar system. 16+ light years away, they’ve been moving away from Earth since 1977 and they’re still going, transmitting bits of data back to JPL. As the program manager spoke, a replica of Voyager, down to the Golden Record, was sitting to my left. Now *that* is a cool auditorium. 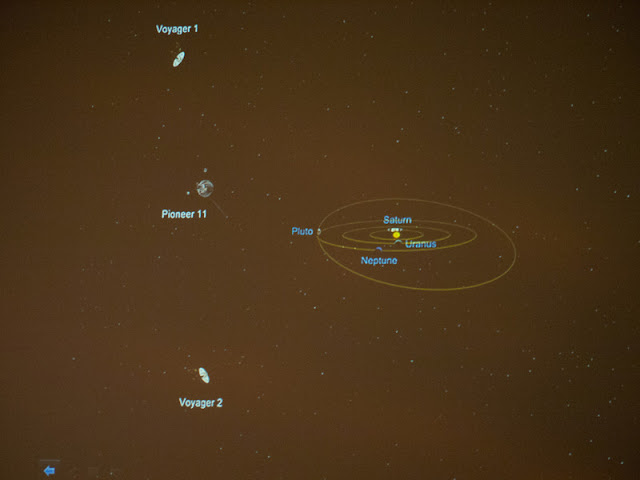 Aquarius, the Earth-orbiting mission to study water and salinity, came complete with a demonstration of how global warming works by heating a balloon filled with air and watching it burst, then seeing the same flame not cause a water-filled ballon to blow up. Water absorbs heat better than air, that was the lesson, but I have to admit the balloon demo was cool all on its own. My high school science class was never like that, sadly. 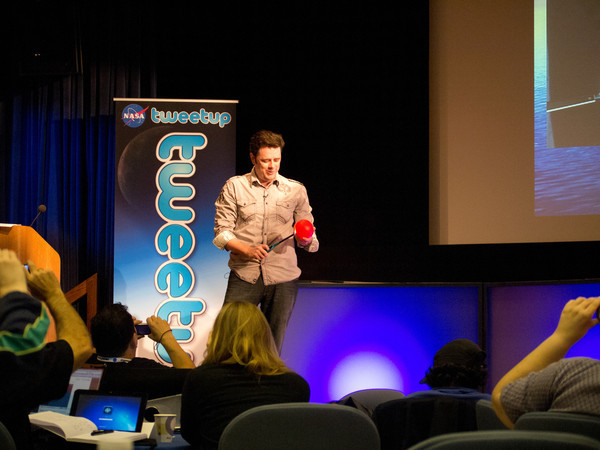 We heard about GRAIL, the twin spacecraft that would map the moon more closely than ever before and Juno, soon to start its five-year trip to Jupiter, my favorite planet. Forget Star Trek, this is a real five-year mission, one tiny little spacecraft crossing most of the solar system to get to the gas giant. In the Visitor Center, I got to hold a model of Juno, which was a thrill hard to explain. 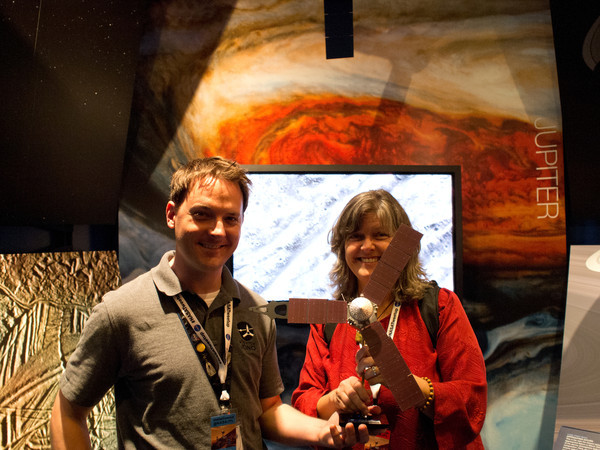 We met Curiosity, albeit through glass in the clean room. Mars Science Laboratory, nicknamed Curiosity, was undergoing final tests before being packed up for the trip to Kennedy Space Center and launch in November (which I was so lucky to see in person!). One of the lead scientists gave us an overview of MSL and then answered a ton of questions as we watched the clean room technicians run some tests. 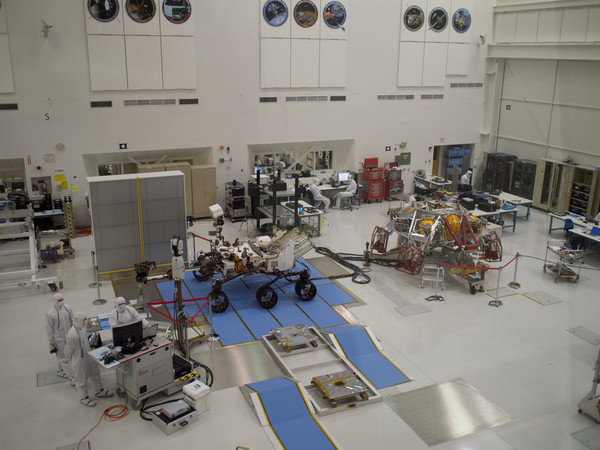 One of my favorite sessions was mostly unplanned, a sit-down with a Mars Rover program manager and two Rover drivers remembering the Mars Rover Spirit, which had recently been given up as lost after a year of not responding to commands. I fell in love with the whole lot of Mars robotic machines listening to these three people talk about Spirit, and Opportunity, and working with them for seven-plus years. 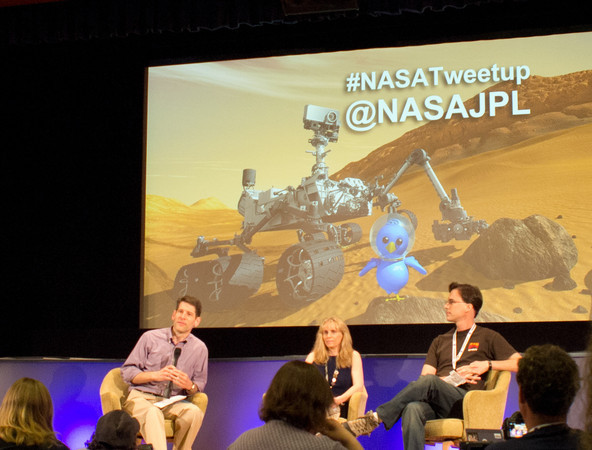 And one very enthusiastic guy, the inimitable Doug Ellison, printed out poster-size paper for each of us to hold, designed to provide a special farewell to Spirit, and used a powerpoint to explain how it would all work. It was a combination of passion and geekiness that, in the months to come, would personify all that I love about the day at JPL. I loved my page so much I framed it and it hangs in the hallway where it makes me smile still every time I walk past it.

And here’s everyone without the paper…

For one special day, all of us were treated to insider’s view of JPL and NASA projects and it’s something I’ll remember forever. I’ll remember how as projects were presented, the back of the auditorium would fill up with team members, wanting to see what we thought of their work, excited to share it with us. I’ll remember the rock-star standing ovation given to John Casani, who’s been working at JPL since the 1950s on everything from Pioneer and Mariner to Galileo, Voyager, and Cassini and the surprise on his face as the whistles and cheers lasted more than a minute. I’ll remember seeing a moon rock from a foot away, looking down at Mission Control, and seeing people who make scientific discoveries and then figure out ways like NASA Eyes to share them with the rest of us.

Most of all, I’ll remember that this one day expanded my world from our Moon where Grail has now finished the initial mapping work, to Mars, home to two Rovers and soon to Curiosity, on to the asteriod belt where Dawn is now finishing up the investigation of Vesta before turing to Ceres; to Saturn where Cassini still toils, on to Jupiter where Juno is headed, and all the way to the edge of our solar system where the Voyagers continue on where we can only dream of going ourselves some day. 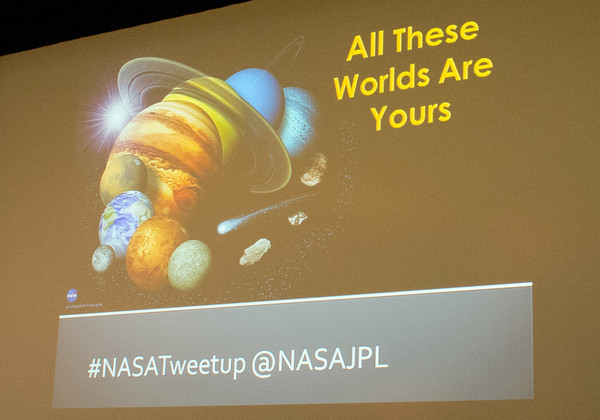 Thank you to everyone at JPL and NASA who made this day happen. I think everyone I know has heard about my day at JPL, and now I’m kind of referred to as the “space nerd” in my various circles of friends. I point out the #ISS overhead to the carpenter across the street, I show Saturn and Mars in the night sky to bikers in the hotel parking lot, I chat with a total stranger as I borrow his solar filter to see the Venus Transit. A year ago, I would have not done most of these things. I didn’t know how much exploration is going out there in the rest of the solar system. I didn’t know, but now I do. And my life is all the richer for it.

Bonus Content: Here’s a boatload more pictures from that day…